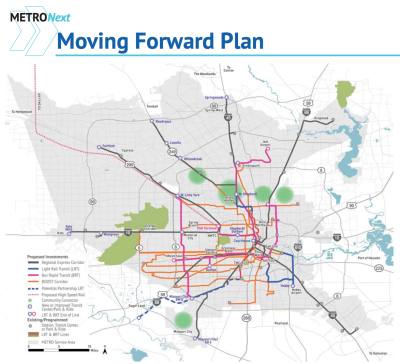 As the Metropolitan Transit Authority of Harris County continues to shape its first comprehensive regional plan since 2003, authority representatives addressed Humble City Council at the March 29 meeting to discuss proposed mobility projects that could affect the Lake Houston area.

Clint Harbert, vice president of system and capital planning for METRO, said the METRONext plan is needed to address future mobility needs in the Houston region as the population grows. To combat the impending vehicle congestion, METRO is in the process of developing a mobility improvement plan that includes regional transit projects through 2040.

"[The population growth] really translates to a significant increase in [METRO] ridership over where we are today ... by about 103 percent with this investment," Harbert said at the meeting. "This translates into 632,000 passenger trips carried on our system daily. That translates into 134,000 more cars over today that we will take off the road."

As for public transportation projects impacting the city of Humble, the Hwy. 59 corridor is staged to get diamond lanes—which are expanded two-way high-occupancy vehicle lanes, according to the draft of the mobility improvement plan.

The proposed diamond lane would allow drivers on Hwy. 59 who are carpooling in off-peak directions to experience quicker travel times, Harbert said.

"In the mornings as [traffic] goes [into Houston], there’s going to be ... northbound lanes," Harbert said. "It will create a diamond lane for people carpooling or people in vanpools to be able to get out [of Houston] much quicker."

Projects from the plan could be funded in part by METRO's proposed $3.5 billion bond referendum—which officials say will be on the November ballot but has not yet been officially called—as well as federal funds from the Houston-Galveston Area Council, said Thomas Jasien, METRO's deputy chief executive officer. He also said METRO will continue to accept public feedback on the projects as planning moves forward.

"We’re trying to attract as many federal dollars as we can for the projects," Jasien said. "In order to do that, it requires a very stringent federal process where you actually have to go back out to the community and say, 'Is this your preference? Is this what you want?'"

Funds for the projects will also be collected through sales tax revenue from 14 multicities—including Humble—that make up METRO's taxing base. According to METRO, the city of Humble contributed roughly $6.8 million to the authority in 2018.

Humble Mayor Merle Aaron said at the meeting that many public transit projects have missed the city of Humble, as the nearest park and ride is located in Kingwood. With vehicle congestion increasing near the George Bush Intercontinental Airport, Aaron said the city would benefit from more direct transit opportunities.

"It seems like [transit services] kind of passed right through Humble," Aaron said. "So we’re looking forward to seeing what we come up with that’s going to benefit Humble directly. We’re one of the larger economic areas in the multicities, so we’d really like to see what we can do to help with traffic around here."

Correction: The original version of this article stated the incorrect name for the Houston-Galveston Area Council.
SHARE THIS STORY

The new restaurant features a full-service bar and a Cajun-inspired menu with dishes including boiled crawfish, po'boys and homemade gumbo.