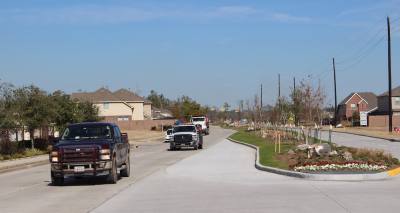 The extension of Woodland Hills Drive opened between Beltway 8 and FM 1960 Jan. 10.

Harris County completed construction on the expansion of Woodland Hills Drive three months ahead of schedule and more than $1 million under budget in early January.

Phase I of the $8.2 million project widened the existing two-lane roadway to four lanes between Beltway 8 and Ridge Creek Elementary School in addition to creating a sidewalk. Phase II featured the construction of a new four-lane thoroughfare and a bridge across Williams Gully. It connected two portions of the road that previously were dead ends.

“We are three months ahead of schedule because of that pulling together,” Precinct 4 Commissioner Jack Cagle said. “Many hands make a load light.”

The roadway provides a north-south connection between Beltway 8 and FM 1960 and relieves pressure from West Lake Houston Parkway, which is often congested during peak traffic times.

“It’s going to be huge for our community,” Jenna Armstrong, Lake Houston Area Chamber of Commerce CEO, said. “There are thousands of people that are expected to move in. We already feel the congestion. The forethought put into this is phenomenal.”