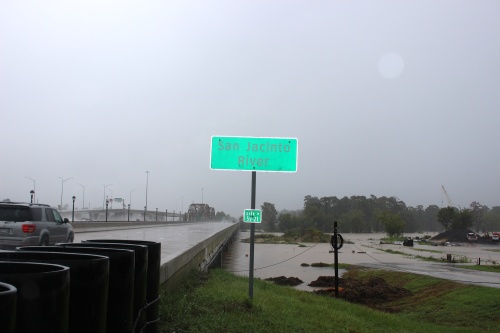 The West Fork of the San Jacinto River at Hwy. 59 in Kingwood came out of its banks on Sept. 19.

With remnants of Tropical Depression Imelda apparent across the Houston region, much of the Greater Houston area is still under flash flood watch as of 6:20 a.m. Sept. 20, including some parts of the Lake Houston area.

The National Weather Service declared in a Sept. 20 news release that while the threat of rain is low, residents should still exercise caution in low-lying areas and near rivers.

The Flood Warning Continues for The West Fork San Jacinto Near Humble until Late Saturday Night Or until The Warning Is Canceled.. https://t.co/04qa2pzERU #txwx #houwx #bcswx pic.twitter.com/G3kbQGvKZj

Additionally, the Houston Parks and Recreation Department announced that Lake Houston will be closed to recreational activities through the weekend from Sept. 20-22.

According to a Sept. 20 news release from the city of Houston, the lake is being closed off because high water levels can hide debris and other dangerous materials as well as cause stronger currents which could make water rescues more challenging.

"The effects of Tropical Storm Imelda are still being felt by our neighbors across the region. In the interest of safety, we are asking citizens to avoid Lake Houston for recreational activities this weekend until conditions improve," said Steve Wright, Director Houston Parks and Recreation Department, in the release statement. "We plan to reopen on Monday as water levels subside."