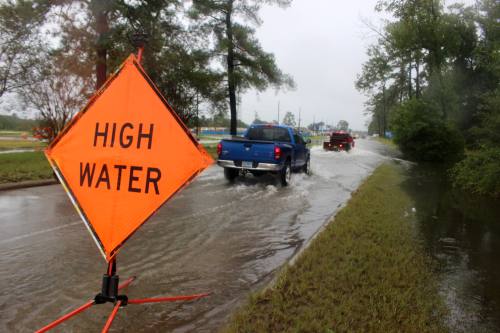 Robert Scott was one of many Kingwood residents stuck at the intersection of Northpark Drive and Loop 494 midday on Sept. 19, as high waters from Tropical Depression Imelda made driving east or westbound on the corridor nearly impossible.

Having sat in in his truck for four hours, Scott said he considered walking the roughly four miles back to his home since Kingwood's two major thoroughfares—Northpark and Kingwood drives—were flooded.

"It's better than being stuck here for 12 hours," Scott said. "There's really only two ways to get in and out of Kingwood unless you're taking side roads, but those get flooded, too."

Some areas of Kingwood have received almost 18 inches of rain in the last 24 hours, according to data from the the Harris County Flood Warning System. The Houston Office of Emergency Management was unable to provide details on how many homes and businesses were affected by the storm by press time.

HISD Chief Communications Officer Jamie Mount said most of the campus—such as fine arts facilities and academic areas—was unaffected by the rain, although, rainwater did seep into some athletic areas. Crews are on-site Thursday evening to clean the water, and the district will assess what repairs are needed, Mount said.

Some local residents also assisted with high-water rescues. Kingwood resident Kirsten Tubbs said a family friend was stuck at George Bush Intercontinental Airport Houston, so she drove from Kingwood to get them. She said she would not advise others to attempt high-water rescues, because although she traveled in a lifted truck, some flooded areas near Will Clayton Parkway reached the bottom of the vehicle.

"I'd say our floorboards are about 3.5-4 feet off the ground and we still had water coming up to here," Tubbs said.

This post will be updated with more information on the affected neighborhoods when it becomes available.