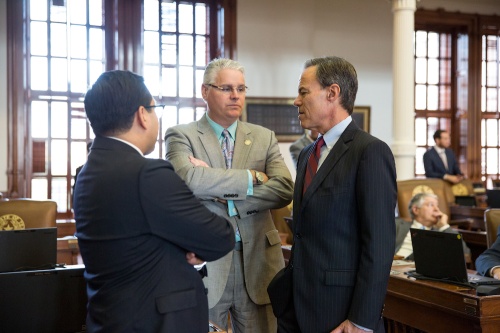 Lake Houston area legislator Dan Huberty announced that he will seek re-election in 2018.

Poe has served for 13 years in the U.S. House of Representatives before announcing Nov. 7 he will not seek re-election in 2018.

“Thanks to the good Lord, I’m in good health, but it’s time for the next step,” Poe said. “I am looking forward to spending more time in Texas, especially with my 12 grandkids, who have all been born since I was first elected to Congress. I am proud of the work that my office has accomplished: giving crime victims a voice, helping to combat human trafficking, and fighting for our constitutional rights and individual liberty.”

Poe served on the House Judiciary Committee and the House Foreign Affairs Committee as chairman of the Subcommittee on Terrorism, Nonproliferation and Trade.

He was elected in 2004 after serving for 22 years as a criminal court judge in Houston. Poe also spent eight years in the Harris County district attorney’s office.

“Congressman Ted Poe has served the second congressional district well for more than a decade with an undeniable passion for our Lake Houston area and its citizens,” said Jenna Armstrong, president of the Lake Houston Area Chamber of Commerce. “Throughout his tenure, he has supported pro-business policy and has been a relentless advocate for victim’s rights, law enforcement and border security.”

State Rep. Kevin Roberts, R-Spring, announced he will resign his current position and seek the Republican nomination for Poe’s seat in November. Roberts’ District 126 covers a portion of northwest Harris County, including Cypress, Spring and Tomball.

Meanwhile, Huberty announced in November he would seek re-election as a state representative.

“This election gives me one more chance to get back out on the campaign trail to talk to the voters and ask for the opportunity to continue to serve them in the Texas Legislature,” Huberty said

Huberty was first elected in 2010 and serves as the chairman of the House Public Education Committee and as a member of the Pensions Committee.

“As the chairman of the Public Education Committee, we made great progress serving the 5.3 million children in Texas public schools,” Huberty said. “The passage of [House Bill] 21 was the first step toward finally addressing public school finance.”