This month, Harris County Precinct 4 will begin construction on the first phase of a master plan to redesign Mercer Botanic Gardens, a roughly 400-acre park between Spring and Humble. Several flood-damaged features are also set to open in early summer, officials said.

The garden, located at 22306 Aldine Westfield Road, Humble, is split down the middle by Aldine Westfield Road. The east side of the garden consists of the botanic gardens, with more than 10 maintained gardens; the Baldwin Boettcher Library; and several miles of trails. The west side of the park is the arboretum, which features a playground, picnic areas, a boardwalk through a bog, a swamp, and walking trails.

Mercer Botanic Gardens Director Chris Ludwig said Mercer is a special place where visitors can enjoy nature, access ornamental plants, and learn how to manicure and grow plants at home. 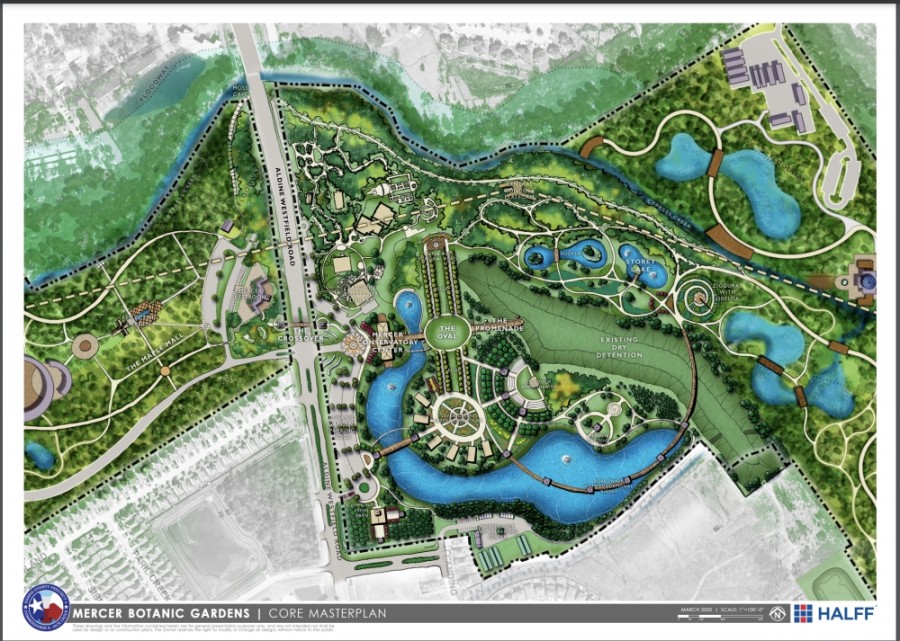 The idea to create a master plan emerged after Hurricane Harvey brought 10 to 12 feet of floodwaters through Mercer in August 2017, Ludwig said. In late 2019, Ludwig said, Halff Associates Inc. completed its preliminary redesign for Mercer, including flood mitigation strategies and plans for the additional 40 acres that the precinct acquired to the south of the garden.

"We've always talked about that property south of us, so it's kind of exciting [after] all the years I've been here to be able to obtain it and start growing the gardens more," he said.

Construction on Phase 1 of the master plan is set to begin March 8 and be completed in late September, Ludwig said. The $4.98 million phase includes building a wet-bottom retention area and three new greenhouses and using the soil from retention basin to elevate the property to the flood line of Harvey.

The new greenhouses, which will be south of the garden's future maintenance and operations center site, will replace the greenhouses in the Central Garden that were flooded by Harvey.

"Once we get the new greenhouses to a point where ... we can transfer all of our plant material over. Then, we'll remove these existing greenhouses, and we'll come up with a plan to reshape the gardens around it and probably create a green space for events," Ludwig said.

The preliminary design for the eastern expansion includes numerous new features, such as the Mercer Conservatory Center, which will house sensitive plants; an oval lawn where events and movie nights could be held; seven new greenhouses; a Japanese garden; a ziggurat much like the spiral mound at Hermann Park in Houston's Museum District; and an outdoor amphitheater that could seat several hundred people.

The plan also includes a boardwalk over the new retention basin, a community event barn for programs, renovations to the arboretum on the west side of Aldine Westfield Road, and a walking bridge over the road to provide further connection between the east and west sides.

However, Ludwig said all these features are subject to change, and plans will be adjusted as development moves forward. County officials have said they hope to return to the preliminary master plan in 2022 to determine future phases and build out, he said.

Mercer's overall redesign and expansion will likely take place over the next five to 10 years, as funding has not been secured for any future phases, Ludwig said. Funding for Phase 1 was granted to the county from the state's Community Development Block Grant Disaster Recovery program.

Several gardens on the east of the gardens that were damaged by flooding events will soon reopen. Storey Lake and the Creekside Ramble trails are set to reopen to the community in late April, Precinct 4 officials said.

Community members who want to contribute to future maintenance and build-out of Mercer can donate to the garden's nonprofit, the Mercer Society, which raises money for the gardens by hosting plant sales and other events.

Correction: The original version of this article incorrectly said the planned Mercer Conservatory Center will be the future site of the main entrance. However, officials said Baldwin Boettcher Library, once it reopens, will be the main entrance as the master plan build out continues.