Atascocita, Edgewater parks on track to open in 2020 in the Lake Houston area 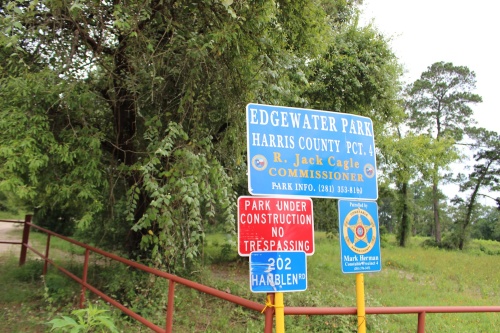 Edgewater Park, located off Hamblen Road in Kingwood, is scheduled to open in 2020.

Mike Howlett, the special project coordinator for Harris County Precinct 4, said it is important to the county to preserve green space not only for recreational and environmental purposes, but to develop resilient areas that will minimize structural damages during severe rain events.

“The closer any kind of development is to the waterways, the more likely they are to have problems from these severe rains that we have,” he said. “By preserving these areas ... they can hopefully reduce the damage that occurs to infrastructure when we have those types of events.”

Harris County Precinct 4 will soon break ground on its redevelopment of once-private Edgewater Park. Although the county acquired 86 acres of land on the north and south sides of Hamblen Road near Hwy. 59, Phase 1 of the park is only 19 acres.

Construction on Phase 1 of the $2.17 million park will begin in early 2020 and take roughly six to nine months to complete, Howlett said. It will include roads, restrooms, a fish cleaning station, a boat and canoe launch, and a trail connector to Spring Creek Greenway, a more than 16-mile trail that travels from the San Jacinto River bridge at Hwy. 59 to I-45.

Phase 2, which will take place on adjacent land north of Hamblen Road, will feature more natural park space and trails. However, Howlett said there is not a construction timeline for Phase 2, as it cannot begin until Harris County Precinct 4 starts its mobility project to realign Hamblen Road between Laurel Springs Lane and Sorters McClellan Road—as Hamblen Road cuts directly through the 86-acre property.

Additionally, Howlett said the city of Houston is acquiring land to extend the Spring Creek Greenway Trail from Edgewater Park east along the San Jacinto River to connect to River Grove Park in Kingwood.

“By building Edgewater Park and creating this trail connective, it will tie the 100 miles of Greenbelt Trails in Kingwood to the Spring Creek Greenway,” he said.

Meanwhile, Harris County Precinct 2 continues construction on Atascocita Park, which is located just south of the intersection of West Lake Houston and Will Clayton parkways. Precinct 2 acquired 21 acres of land in early 2017 and invested roughly $10.6 million in the project—$5.3 million to acquire land and $5.3 million to build the park.

“The Atascocita area is growing very rapidly, and a lot of green space is being used for retail or for more housing development,” Project Manager Marco Montes said. “Building a park is a good way for us to preserve green space and also utilize it.”

The park will feature a path system, a playground, a 2-acre natural pond with a boardwalk, and a 1.5-acre dog park that will be split into two sections for small and large dogs.

Construction on Atascocita Park began in late September. Although the park was originally scheduled to be completed later this year, the date has been pushed back to the second quarter of 2020, Montes said.

“Any sort of rain really sets us back because not only do you have to let the rain stop, but you have to allow some time to dry and start working again,” he said.