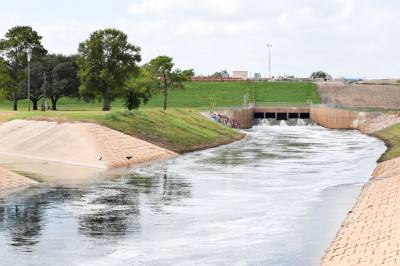 Harris County is preparing for a bond referendum that could exceed $1 billion.

Harris County officials are taking preliminary steps toward calling for a bond referendum in 2018.

Harris County Judge Ed Emmett and county commissioners favor a referendum that exceeds $1 billion for regional flood mitigation projects after three 500-year floods in two years, Emmett said. However, the decision to call a bond and the size and scope will be determined by the amount of state and federal funding the area receives, county spokesperson Joe Steinbaker said.

The projects included in the referendum could be based on 15 proposals to revamp the Houston area's flood control system Emmett submitted in October, he said at the State of the County Address in late November.

“The rains spawned by Hurricane Harvey were unprecedented, and perhaps we will never see anything like them again, but we cannot ignore the fact that our area has suffered three so-called 500-year rain events in the past two years and too many parts of our county have flooded repeatedly,” he said.

The 15 proposals Emmett unveiled in October include funding the construction of a third reservoir in the Cypress Creek watershed, creating a regional flood control organization and adding new development standards in the 100-and 500-year floodplains.

He also proposed buying hundreds of flood-prone homes in the county and converting lakes Houston and  Conroe to flood control facilities in addition to being used as a source of drinking water.

Some of the major projects—such as the third reservoir—would require state or federal funding as well, he said.

“Harris County taxpayers will be asked in the not-distant future to fund a specific list of flood control projects that [Harris County Precinct 4] Commissioner [Jack] Cagle and the other commissioners and I and [County Engineer] John Blount and all the other county employees are involved put together,” Emmett said.

Harris County voters approved a $848 million bond in 2015 that included four propositions, including a $700 million proposition for road improvements and $60 million for parks.

Swift action is necessary to prevent Houston and Harris County from getting the perception of a flood-prone swamp, Emmett said.

“We simply cannot keep kicking the can down the road,” Emmett said. “Why? I fear that many Americans and others around the world perceive Houston and Harris County as a flood-prone swamp.”
SHARE THIS STORY