The Residential Noise Mitigation Program in the North Hollow neighborhood, located south of Will Clayton Parkway, will come to an end in August. (Kelly Schafler/Community Impact Newspaper)

On most days, about 250 planes soar hundreds of feet above the rooftops of North Hollow Estates. The Humble neighborhood, located south of Will Clayton Parkway, is in the final approach for George Bush Intercontinental Airport.

Planes cruise over, sometimes in 5-minute intervals, creating a whirring sound that resident Betty Schmid said she has heard since she moved to North Hollow in 2009.

“They would go over here, and it would sound like it was going to blow the kitchen out,” she said. “You’d think they were going to land on the roof of the house, part of the time.”

Using a sound meter app at two spots near North Hollow’s entrance May 5, Community Impact Newspaper measured the decibels when planes flew over the neighborhood. The peak was measured at about 80 decibels—similar to levels the Federal Aviation Administration compares to being louder than the sound of a vacuum cleaner.

The North Hollow Civic Association—for which Schmid served as a board member for 10 years—fought for the HAS to insulate homes to suppress the noise from air traffic. Now, the final phase of the Residential Noise Mitigation Program nears an end with the last 31 homes set to be completed in August, HAS Public Information Officer Augusto Bernal said via email.

Getting 163 homes in North Hollow sound insulated took three contractors, $9 million in federal and local funding, meetings with a U.S. representative and 10 years to complete. Moreover, other neighborhoods in the Humble area could one day face a similar situation as IAH expands. 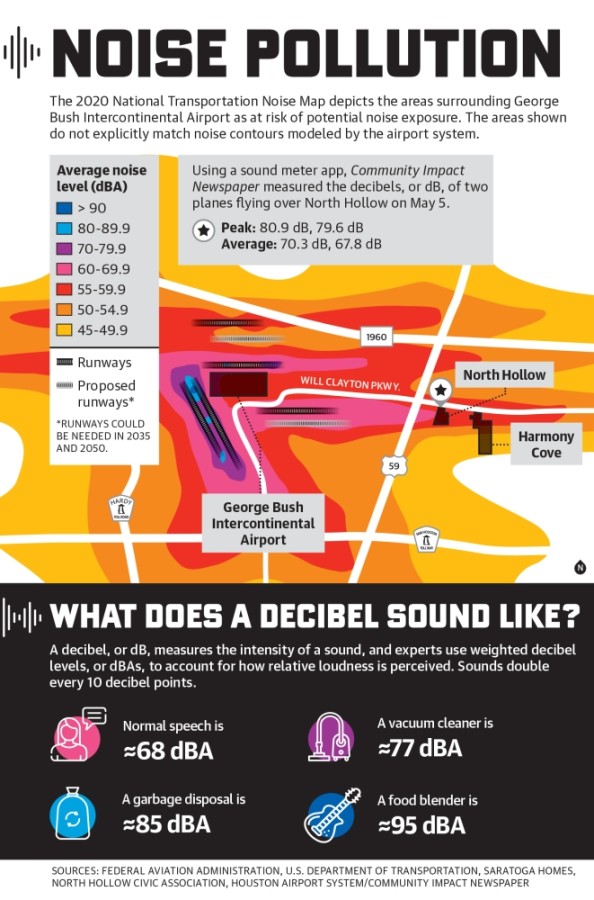 Since IAH was built in June 1969, the airport’s footprint has grown, adding thousands of employees and economic growth to the Houston region. The HAS’ 2019 annual report showed it supported more than 141,000 jobs and contributed more than $27.3 billion to the surrounding economy that year.

“The importance of the airport to this area cannot be understated,” he said. “Roughly 50% of your inbound-outbound traffic that’s going to or from that airport ... is going to be traveling at least a portion of our city [and] utilizing our restaurants.”

In the Greater Houston area, IAH and William P. Hobby Airport are shown to be large sources of noise pollution, according to the report.

In August 2000, the FAA issued a record of decision stating IAH needed to re-evaluate its environmental impact when updating its airport master plan and create noise mitigation programs for neighborhoods if they approached a significant noise contour level, an FAA representative said via email.

The noise contours—or models of noise exposure from aircraft operations—show maximum day and night levels, or DNL, for areas within the lines. Airports are required to provide noise-reduction options to communities within contours of 65 DNL or higher, per FAA guidelines.

In 2009, IAH’s airport master plan update showed North Hollow shifted into the 65 DNL. The airport noise did not bother Hayden much when she bought her North Hollow home. Much of the neighborhood was built in 1978, when air traffic was minimal, Hayden said.

“Then they put in more runways,” she said.

The HAS launched its Residential Noise Mitigation Program—known as the Quieter Home Program—in 2011 to mitigate the effects of aircraft-generated sounds in North Hollow with five voluntary programs: sound insulation, sales assurance, transactional assistance, purchasing development rights and avigation easements—when the airport provides a one-time cash payment to homeowners who allow aircraft to fly over their homes without conflict.

Although all North Hollow homes were eligible for mitigation, only those with interior noise levels of at least 45 decibels could receive sound insulation, according to the program’s website. When the first 60 homes were tested in late 2011, only 11 reportedly met the decibel requirement.

A multiyear battle followed as the NHCA argued for alternative decibel testing methods to allow more homes insulation upgrades. Former U.S. Rep. Ted Poe, who assisted the North Hollow neighborhood, said he believes the program was delayed because Humble residents were of less concern to the city of Houston.

“To me, personally, that was always in the background of resistance from the city of Houston because these are not Houston residents that are being affected,” he said.

After meetings with Poe and Humble officials, the HAS and the FAA offered the sound insulation upgrades to all North Hollow homes in 2017, according to the NHCA website.

Of the roughly 190 homes in North Hollow, 163 homeowners chose to receive sound insulation with acoustic windows, new storm doors and added insulation, Bernal said. The $9 million effort is 80% funded by the FAA and 20% funded by the HAS, he said.

Last December, contractors began soundproofing Schmid’s home. Since the upgrades, Schmid said she has not heard anything—not the planes nor trains on the nearby tracks.

Regarding the 10-year effort, Bernal said the HAS has worked to quickly address the community’s needs.

“Houston Airports has worked diligently with the FAA to satisfy the noise mitigation requirements in the most timely manner possible to help any impacted residents,” he said.

The HAS will continue assessing noise pollution in surrounding communities as IAH continues to expand. The airport is currently undergoing a $1.3 billion capital improvement program, Bernal said.

Part of the expansion aims to improve the airport’s capacity with a new international terminal, which will one day accommodate 33 million passengers annually—triple the current 11 million capacity.

However, Bernal said the coronavirus pandemic’s effect on travel trends will likely delay any increased noise effects. He also said the FAA’s 2018 effort to phase in quieter aircraft will help reduce future noise.

“Houston Airports does not expect to see prepandemic passenger traffic levels until at least 2024,” Bernal said.

In the meantime, Bernal said there are no plans to have any major runway or taxiway modifications at IAH for the next five years.

The airport’s most recent master plan, completed in May 2015, shows the airfield could require a 2,000-foot extension to the 9/27 runway in 2050 as well as an new parallel runway just south of 9/27. Bernal said the HAS is in the process of developing an updated master plan, but it will not be available for at least two years.

While Bernal said the HAS cannot speculate how proposed runways could affect communities, he said the HAS will conduct noise assessments and a full environmental review before any construction begins.

An in-progress development less than 1 mile east of North Hollow is at risk of being within the 65 DNL contour in 15 years, according to the airport’s master plan.

Harmony Cove is a 130-acre development from Saratoga Homes and JNC Development at the southeast corner of Will Clayton Parkway and South Houston Avenue. The contour lines are projected to cover more than half of the 428 home sites in 2035.

“A lot of our target market is the aviation community that’s going to be living and working by intercontinental,” he said.

Homes within the flight path are expected to have 5-foot setbacks between properties as opposed to the city’s standard 7.5-foot setback, a variance Saratoga Homes requested to create a higher density to offset the price of homes “to entice buyers to live under the flight path,” Bombach said.

“Anybody living under the flight path is going to understand it’s a flight path,” Bombach said.

“Maybe [homebuyers] should know, but they don’t know,” he said. “They don’t know that there’s a sound problem.”