The flood control district hosted a virtual public meeting Oct. 20 to outline the findings from its $700,000 Kingwood Drainage Analysis. The feasibility study began last September to determine the capacity of Kingwood's channels with the hope of developing strategies that could allow the open channels to handle a 100-year rain event and reduce flood risk to nearby structures, according to the study.

Matt Zeve, the deputy executive director of the flood control district, said nine of the 19 channels studied were determined to not meet a 100-year level of service. A 100-year storm event, or a storm with a 1% chance of occurring each year, in the Kingwood area brings about 17.3 inches of rain in a 24-hour period, according to the National Oceanic and Atmospheric Administration's Atlas 14 rainfall data.

Of the nine streams and channels found to be lacking channel capacity, the flood control district proposed two initial projects move into preliminary engineering that Zeve said could bring the most immediate and substantial relief: the Kingwood Diversion Ditch and Taylor Gully improvements. All nine projects would cost roughly $148.35 million for construction, detention and land acquisition, according to the study.

"It is important to remember there's no single solution to reduce flooding in the Kingwood area," he said. "Each of the recommended improvements will take many years to implement, and some will require further coordination with other entities, including the city of Houston."

Zeve said the first priority would be modifying the Kingwood Diversion Ditch to divert water away from Bens Branch—a nearby channel with a history of flooding. The diversion ditch flows from the confluence of Bens Branch, then south to the West Fork of the San Jacinto River; it is west of Woodland Hills Drive. 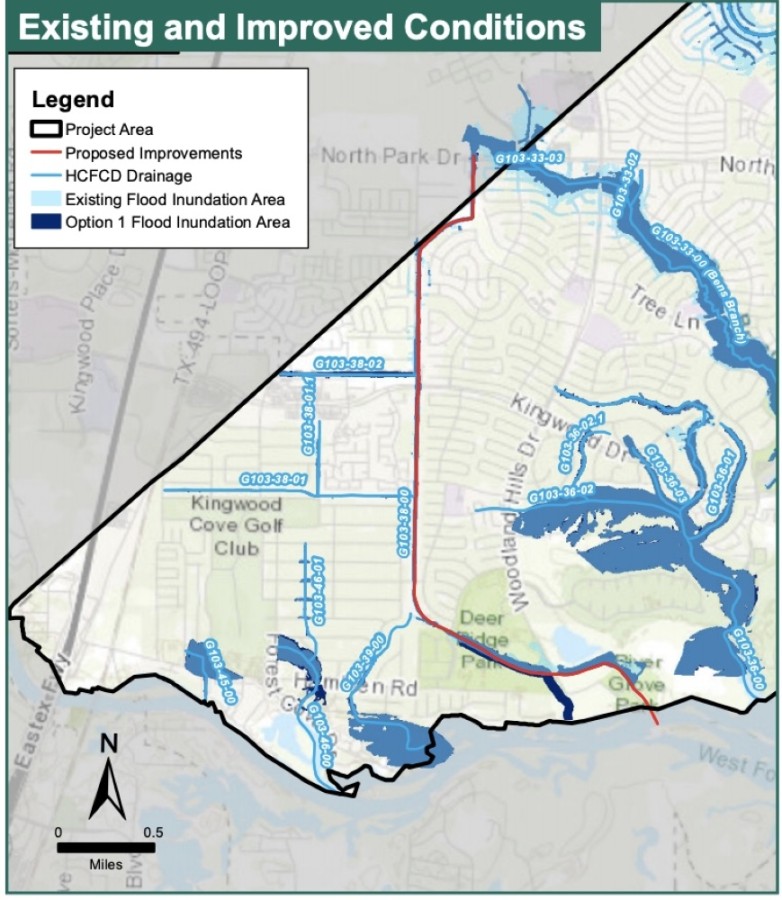 "The reduction in water surface elevations along the Kingwood Diversion Ditch and Bens Branch result in the removal of the 100-year stream inundation from 62 structures and allows for local drainage improvements that could benefit an additional 586 historically flooded structures," he said.

The Kingwood Diversion Ditch project is estimated to cost about $62.9 million for construction, detention and land acquisition, according to the study. An estimated construction timeline was not provided.

However, officials said Bens Branch would still need to be widened upstream and downstream of the Creekwood Nature Area—a nature preserve—for a cost of almost $51 million. Connor McColloch with Neel-Schaffer Inc., the company hired to engineer the study, said the diversion ditch would take a majority of the water flow from Bens Branch, but modifications to the channel are still needed.

"In order to provide a 100-year level of service, we found that improvements were required within the natural section to help all the stresses upstream of that area," McColloch said.

Additionally, the flood control district recommended improvements be made to Taylor Gully, a channel in northeast Kingwood than flows from Bassingham Drive to the confluence of White Oak Creek. 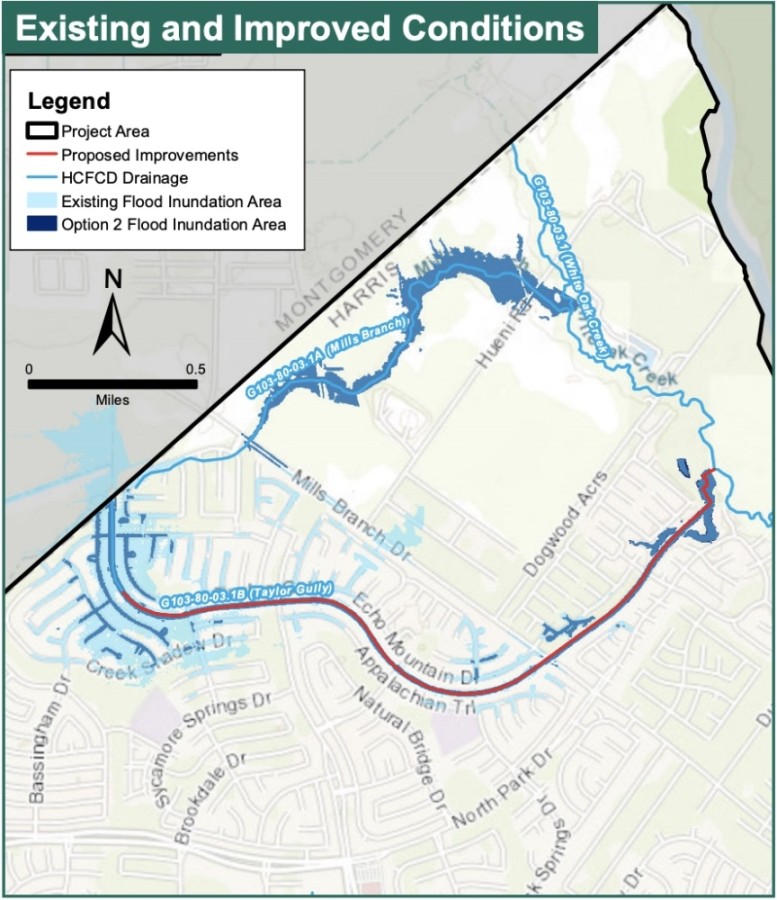 "The upper portion of Taylor Gully was determined to have a 10-year level of service with a large number of structures subject to flooding upstream of Rustling Elms Drive," Zeve said.

The estimated $21.1 million project could remove 387 structures from the flow path of a 100-year storm as well as 62 historically flooded structures that could benefit from local drainage improvements, according to the study. An estimated construction timeline was not provided.

"The proposed Taylor Gully channel improvements will deepen the channel and lower the water surface elevation, significantly protecting the community in the upstream and midranges of Taylor Gully much more than they are today," St. John said.

The flood control district also recommended Taylor Gully be reanalyzed to determine how creating a regional detention basin over the unfinished 268-acre Woodridge Village development—located at the mouth of Taylor Gully—could benefit more structures along the gully.

The district recommended using the remaining funding allocated to the Kingwood area in Harris County's $2.5 billion flood infrastructure bond approved by voters in August 2018 to fund the projects. The 2018 bond allocated $10 million to Kingwood for planning, right of way acquisition, design and construction for general drainage improvements; roughly $600,000 was used to fund the drainage study.

"The amount of money that was allocated for projects in the Kingwood area is not enough to take on more than those first two projects," Zeve said. "But the flood control district will continue to work to find additional funds ... to keep these projects moving forward now that they've been identified."

The Kingwood study proposed numerous other channel improvements, including widening Bens Branch after the Kingwood Diversion Ditch is completed and improving Kings Crossing Ditch and Bear Branch. The district also recommended three channels owned by other entities also be improved.

A similar study will be prepared for the Atascocita area next year, Zeve said. The Atascocita Drainage Analysis, which will kick off in July 2021, was also allocated $10 million from the bond for the study and subsequent projects.