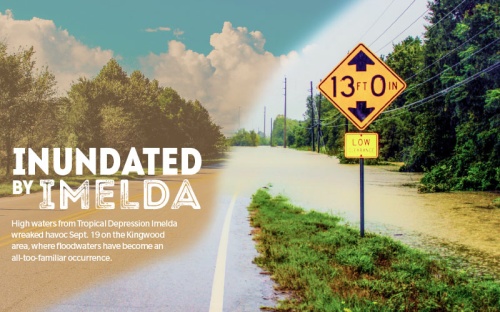 Water breached the banks of the West Fork of the San Jacinto River at Hwy. 59 during Tropical Depression Imelda.


Muddy floodwaters infiltrated Kathleen Hood Deshazer’s home Sept. 19. One moment, Tropical Depression Imelda’s rainfall was filling Kingwood’s streets; the next, it was an unwanted guest bringing several inches of water into her home, she said.

Deshazer said the water came into her home in Hunters Ridge from “everywhere”—from her garage, the back and front doors, from under the kitchen cabinets and through the walls.

“I went in and woke my son up and said, ‘Andrew, get up, because we’re fixing to get it,’” she said.

Although not the worst rainfall event the Lake Houston area has seen, Imelda dropped 14-29 inches of rain on the Humble, Kingwood and New Caney areas between 7 p.m. Sept. 17 to 7 p.m. Sept. 19, according to Harris County Flood Warning System rain gauge data.

Hunters Ridge resident Alyssa Breaux said she had 2-3 inches of water in her home by 9:30 a.m. Sept. 19. When water came through her front door and bubbled up from the toilet, she said she began moving items to the second floor.

“We just thought it couldn’t get worse than [Harvey] because we didn’t flood during Harvey, but then we flood during this,” she said.

The Lake Houston area has endured several major flood events in recent years: the 2015 Memorial Day flood, the 2016 Tax Day flood, Hurricane Harvey in 2017 and most recently a storm event in May. As the community faces rebuilding again, residents seek answers on the cause of repetitive flooding in the area.

Although local leaders were still trying to determine the extent of damages in the Kingwood, Humble and New Caney areas as of press time, officials estimate more than 1,000 homes in the Lake Houston area were affected.

Darren Hess, the director of the Montgomery County Office of Homeland Security and Emergency Management, said at Montgomery County Commissioners Court on Sept. 24 that the east part of the county was hardest hit, including New Caney and Porter.

Hess said an estimated 1,104 properties in Precinct 4 alone were affected by the storm, and the largest evacuation was at Pine Shadows Nursing Home in Porter with 177 patients.

“As the waters began to recede, we saw the damages,” he said. “We’re now estimating 1,500-plus homes will have been affected [countywide].”

Cory Stottlemyer, a public information officer with the Houston Office of Emergency Management, said a significant portion of affected structures are in Kingwood-area neighborhoods such as Elm Grove, Hunters Ridge and Forest Cove.

As of Sept. 24, Stottlemyer said emergency management has determined there were 408 properties in Houston damaged by Imelda—most of them in Kingwood.

Additionally, Humble City Manager Jason Stuebe said about 20 homes in the Northshire community had water varying from a few inches to roughly a foot. Seven homes in the Timberwood community and the Esperanza Apartments also had several inches of water.

Rodney Martinez, the owner of Sergio’s Tile and General Remodeling Inc., said he was contracted to repair a North Kingwood Forest home hit by 4 inches of rain in May. His team had almost finished repairs when 2 feet of water entered the residence Sept. 19.

“I had called the homeowner [before Imelda] and told her she would be able to move back in this coming week,” Martinez said.

The Elm Grove neighborhood has dealt with the brunt of recent Kingwood-area floods, as the May event flooded more than 300 homes when the rain overwhelmed Kingwood’s drainage system, and some of the same homes were hit during Imelda again. Some residents said they believe an incoming residential development from Figure Four Partners just north of the neighborhood exacerbated flooding.

Two Houston-area law firms are representing more than 100 homeowners across 70 households in a civil lawsuit against the developer, according to court documents filed in Harris County District Court on May 14. A representative for Figure Four Partners said the company did not wish to comment on the flooding events by press time.

“If the storm sewers get full, then the water builds up out into the street and then, hopefully, runs down the street and eventually to an outfall,” he said. “Unfortunately, there’s some areas in Kingwood [where] that may not be working out well yet.”

Matt Zeve, the executive director of the Harris County Flood Control District, said the agency is studying Kingwood’s drainage to come up with potential solutions. In September, contractors began an in-depth study of the service level on all Kingwood channels and drainage ditches.

Zeve said the engineering portion of the project, which costs $700,000, will be completed in early 2020, and contractors will present their findings in April. Although Zeve said Kingwood’s drainage operates at a high level, channel capacities could be increased.

“Our scope of work will be to tell them what it will take to provide 100-year level of [drainage] service for our channels in Kingwood,” he said.

By the second day after the storm, Lake Houston-area homeowners began rebuilding again. Volunteers, local groups and flood survivors rushed to affected areas to lend a hand, cutting insulation from walls and stripping homes of their carpeted foundations.

North Kingwood Forest resident Chris Hair said he, his wife, his two children and their two dogs were evacuated from their home. They waded through thigh-deep water to the high-water rescue vehicles before they were transported to Second Baptist North near Hwy. 59.

When the water receded the next day, Hair and his family returned to their home to find a group of people from his son’s school waiting for them.

“They had a crew of people over here at 10 o’clock [in the morning]; probably 20 different people just came in and just started tearing out,” Hair said.

Elm Grove resident Pat Leard, 78, said she is familiar with rebuilding. When Hurricane Katrina leveled Leard’s Louisiana home in 2005, she and her now-deceased husband, John, relocated to Kingwood. Leard’s home was unaffected by the handful of major storms that have hit the area in recent years.

In Imelda, however, Leard sat on her living room couch, lifting her legs off the ground as several inches of water rushed in from her front and back doors.

Later, sitting in her garage as family members and volunteers cleaned her home, Leard said she did not care much about carpet, furniture and the other items stacked on her front lawn. Picking up several wet photo albums, Leard said she did care about those memories.

Correction: The original version of this article incorrectly stated that River Bend was one of the Kingwood neighborhoods impacted by Imelda. This was not accurate, and the story has been updated to remove the misinformation.