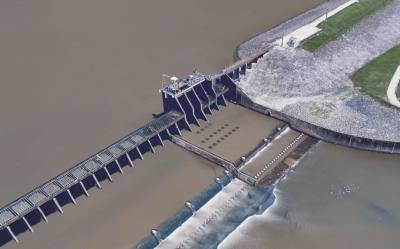 The Lake Houston dam is shown in a Google Earth Pro aerial photo.

Lake Houston will soon be a foot below its normal pooling level through fall 2020, as contractors will soon begin repairs on the Lake Houston Spillway Dam Rehabilitation Project.

According to a news release from Houston City Council Member Dave Martin, Houston Public Works and the Coastal Water Authority began lowering Lake Houston by 6 inches May 21 from its normal pooling level of 42.5 feet above mean sea level. As of May 22, the lake has been lowered its required 6 inches.

Moreover, the city of Houston will lower the lake level an additional 6 inches May 28, after Memorial Day weekend, the release stated.

Houston Public Works will continue to monitor lake levels and keep Lake Houston at 41.5 feet above mean sea level until fall 2020, when the project is completed. Waterfront homeowners along Lake Houston should secure their property, according to the release.

"During the time of this project recreational activities will be disrupted and boaters are urged to use extreme caution on the lake due to lower levels as well as increased instances of exposed debris," the release stated.

The dam release is being done to allow the contractors, Thalle Construction Company, to work on the Lake Houston Spillway Dam Rehabilitation Project. Erin Jones, public information officer for Houston Public Works, said the goal of the $10 million project is to provide more stability to the dam in compliance with the Texas Commission on Environment Quality's guidelines.

The project, which is funded by the CWA, includes installing a new reinforced concrete training wall, building new concrete anchor blocks at the bottom of the dam's wall, as well as elevating the pool weirs by 7 feet to alter the water flow from the dam, Jones said.
SHARE THIS STORY