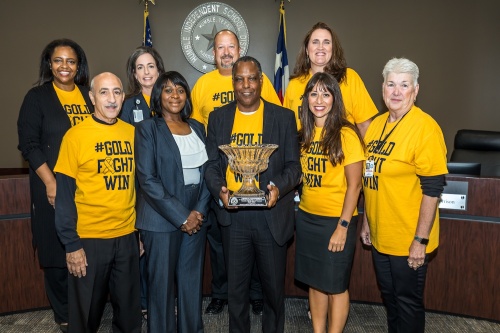 Humble ISD board of trustees bid farewell to Trustee Charles Cunningham (center) on Sept. 10, as he voluntarily resigned to pursue a position at the city of Humble.

Longtime Humble ISD trustee Charles Cunningham's resignation from the school board was unanimously approved Sept. 10 as Cunningham prepares to take on a new role in local government with the city of Humble.

Cunningham voluntarily resigned from the position because he was chosen Sept. 5 to fill a seat on Humble City Council, which was left vacant after Council Member Glenn Redmon died in July from cancer.

During the board of trustees meeting, Cunningham’s fellow board members as well as Superintendent Elizabeth Fagen thanked him for this mentorship during his 12 years serving on the school board.

“Anytime that someone who can be as thoroughly grounded in American public education can go on into another part of the universe and cross-pollinate a bit, I’m excited about that,” Fagen said. “I believe really good things will come from both the city and for the school district as a result of your knowledge, your expertise, your statesman-like position and behavior.”

Following well-wishes from his colleagues, Cunningham said he was honored and excited to take on a new challenge in local government.

“As I reflect back on the past 12 years, I came to the conclusion that while serving on the school board is never easy, it’s always meaningful and even sometimes it’s hard,” Cunningham said. “It has been my honor to work with two superintendents … who have kept us focused on what’s really important, and that’s the kids.”

Cunningham is scheduled to be sworn into his new City Council position at the city of Humble’s meeting Sept. 12, city officials said.

Sitton recommended former trustee Keith Lapeze for the position; Lapeze served 13 years on the board before choosing not to run for re-election of Place 2 in the May election. Meanwhile, trustee Robert Scarfo suggested two other former trustees, Bonnie Longnion and Brent Engelage, as potential appointees.

"It's not a question of Mr. Lapeze, but there are some other people we could be considering," Scarfo said.

Following further discussion among the board members, the board unanimously decided to appoint Lapeze to the position. Lapeze will serve until the next school board election in May 2021.
SHARE THIS STORY