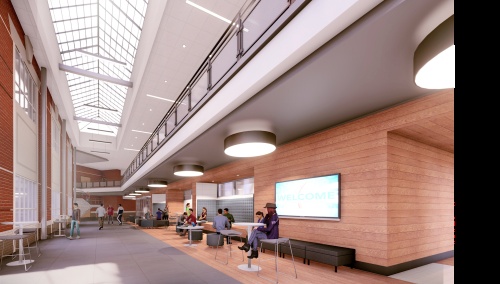 Designs for two Humble ISD high schools as well as the relocation of an existing elementary campus were revealed at the HISD board of trustees meeting Aug. 13.

During the meeting, PBK Architects addressed the board about the upcoming expansions to Atascocita and Summer Creek high schools. Both projects were included in the $575 million bond referendum approved by voters in May 2018.

Chapman said the scope of work for Atascocita High School changed from its original project description—from a 10- to a 20-classroom expansion—at the request of campus and district officials.

“You may remember from the bond that this was supposed to be a 10-classroom addition,” Chapman said. “So we worked with the principal, we worked with your administration [and] we feel like [and] they feel like … that if they do the 20 [classrooms], we get rid of the portables in the parking lot.”

The changes increased the estimated project cost from $9.2 million to roughly $15.1 million, according to PBK.

The design for Summer Creek High School includes adding a third gym and expansions to the weight and locker rooms. The project is estimated to cost roughly $4.5 million, rather than the $5.1 million estimate from the bond package, Chapman said.

HISD Public Communications Director Jamie Mount said the expansion projects will go out to bid in October, with construction set to break ground by mid-December. The additions will be able to be utilized by students in spring 2021, she said.

The $40 million rebuild of the school will expand its capacity from 650 to 950 students and improve the size and configuration of classroom and administrative spaces, according to district data. Since the district is building Lakeland Elementary School on a new plat, it will be able to reopen the school in August 2021 rather than the original August 2022 date, Mount said.

"The new Lakeland Elementary School actually will get to open one year earlier than originally planned," Mount said. "The process can move faster because construction will occur on a site where school is not being held simultaneously, and the new building can be built without having to tear down the older building."
SHARE THIS STORY