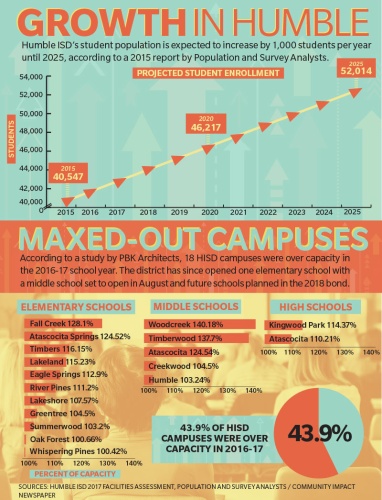 Humble ISD trustees called the district’s first bond election in a decade on Feb. 13,  a $575 million bond package to help the district accommodate growth and address several major issues it has faced over the past 10 years.

Trustees saw the need for a bond election after a 2015 study by the Population and Survey Analysts demographics firm and a 2017 facilities assessment by PBK Architects highlighted the need to address overcapacity at schools. According to the PBK assessment, 11 of the elementary schools, five of the middle schools and two of the high schools were over capacity as of the 2016-17 school year.

“We are expected to grow to around 55,000 [students by 2028], which would mean we are going to grow by another 31 percent from where we are at today,” trustee Robert Sitton said. “We are a fast-growth district. … You can imagine what kind of strain it would put on our regular annual budget if we weren’t able to go out and sell bonds for capital improvements.”

If the bond is not approved by voters in May, HISD will run out of funds to build new schools it has planned for the 2019-20 school year, district officials said.

“To take care of future growth, future needs—whether it’s infrastructure, remodel, tear-down, rebuilds, or new campuses—there was no more capital funds,” Sitton said. “We would have to dip into our normal operating budget. ... That takes away from the educational needs in the classroom.”

HISD’s Community Bond Advisory Committee, composed of 100 volunteers and community members, created several bond packages to recommend to the board. The final two packages shared most of the same projects, including campuswide upgrades like installing wood floors in all middle school gyms.

One of the most contested items within the committee groups was a $50 million natatorium. The project failed to receive approval from two-thirds of the committee, which was required to include it in the recommendations.

Some trustees still debated the item, arguing a natatorium complex could bring national attention to the district. Six of the eight trustees voted against the natatorium, although the complex is not completely off the table. Sitton recommended the board table the natatorium for the time being to provide more time to find public and private partnerships, develop a more strategic business plan and address other more imperative needs with bond money first.

“It was a big item, and it was talked about a lot in the committees I was on,” CBAC member Connie Chandler said.  “I understand why the board decided to table it—it’s just not the right time, especially with [Hurricane] Harvey. We have more needs now than in a normal year.”

“It doesn’t appear we need a high school during this bond period because we have appropriate capacity there to handle that,” Fagen said.

If approved by voters, the bond would fund a new transportation center for the north side of the district as well as upgrades to existing campuses that include renovating career and technical education classrooms districtwide, classroom additions, cafeteria and library renovations at Humble High School, field turf on high school and football fields, and reconstruction of Kingwood Middle and Lakeland Elementary schools.

An integral part of the bond package includes bringing older schools up to current district standards. While only two schools will be replaced with the bond, many are still in need of reconstruction efforts, such as Foster Elementary School, trustee Keith Lapaze said.

“We are facing more of a paradigm shift going forward to try to be proactive on planning replacement cycles and so forth,” Sitton said.

“That is one reason why Lakeland Elementary and also Kingwood Middle School has risen to the top as a candidate for replacement,” PBK Architect Partner Rick Blan said at the Feb. 13 meeting. “Yes, there are other facilities that are not too far behind that, but at some point you need to decide which ones are the highest candidates with the highest needs and then prioritize. And that’s what the FCI study does.”

District officials said the study has helped HISD realize the needs of other facilities and will ensure that all schools are up to district standards.

“It just seems to make a lot of sense to make sure that we have opportunities for all students in our district, no matter where they live or where their school is,” Fagen said. “And I really appreciate the bond committee embracing that idea for Lakeland Elementary and for Kingwood Middle School, because if you’ve been to those schools you know they are not similar to the ones we are building today.”

District officials said a tax rate increase is not required to fund the bond. The district has kept a tax rate of $1.52 per $100 valuation for the past 10 years and hopes to keep that rate for another six.

“I do not anticipate a change [in the tax rate] during this entire bond period,” Sitton said.

Fagen said she believes keeping the rate consistent is especially important now, considering the devastation most of the Humble community experienced during Hurricane Harvey.

Guy Sconzo, executive director of the Fast Growth School Coalition, an advocacy group for Texas school districts, said bond elections are essential for fast-growth districts like HISD. Sconzo said state funding accounted for 7 percent of districts’ debt service payments in 2017, down from 45 percent in 2001. For fast-growth districts, the state funded 5 percent of those payments in 2017.

Sconzo, former HISD superintendent, said he believes bonds can be important for the success of not just school districts, but the districts’ local economies, as schools affect economic development.

“Part of having good schools is continuing to invest in all of the infrastructure and facilities that are necessary to best educate children,” he said. “So on another level to me, the bond referendum is essential in terms of maintaining that investment that indeed provides a return in terms of continued growth from an economic standpoint.”