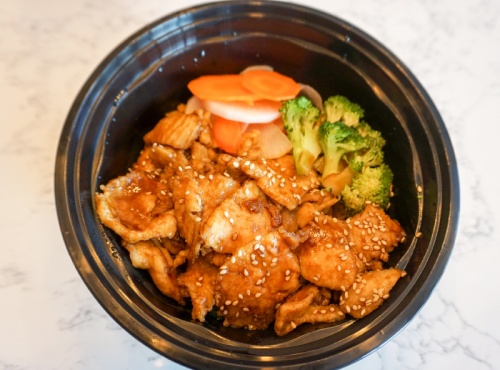 Soyjoy Chicken ($5.99) Chicken is sliced and served with a homemade nsoy-based sauce.

Hai Wang did not originally want to open a traditional Chinese restaurant in the Lake Houston area. He wanted to do “something enterprising for the next generation,” said Wang’s daughter-in-law, Mia Li, who translated for him.

Wang, a chef from Xilin, in north China, cultivated his passion for cooking while working in restaurants in Beijing in his 20s and then in Austin, Dallas, Baytown and Pasadena for about 35 years. Finally settled in Humble, he decided it was time for him, his son and his daughter-in-law to cook healthy Asian fare for the Lake Houston area community.

Originally a sushi and noodle shop, Spice Bowl opened in August 2017 and temporarily closed in February, Wang said. He and his son reimagined Spice Bowl as a made-to-order eatery so Wang could tailor each dish to the customer’s palate and not waste any ingredients.

At the rebranded Spice Bowl, which has been open since October, customers order at the counter and choose lettuce, rice or noodles, then a protein, vegetables and a sauce, all prepared within minutes and served in a black plastic bowl. Signature bowls are prepicked combinations, some mild and others spicy.

Along with steamed white rice, Spice Bowl offers steamed Korean rice that is a choice ingredient for customers who want to avoid gluten.

“Some customers said it’s a little sweeter than steamed white rice,” Wang said.
Wang is most proud of his secret spice combination in a dish called Asian Spicy Rice that is served with no sauce. The secret lies in a mixture of Korean seasoning and Chinese chili, Wang said.

Li said the restaurant focuses on serving healthy Asian fare by using small amounts of oil and not frying much of the food.

“The restaurant is not only about cooking,” Wang said. “It’s also about lifestyle. I want people to eat good, look good and feel good.”