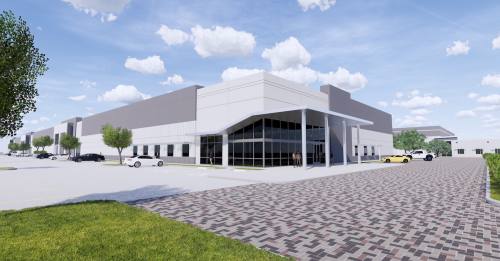 The logistics sector is primed to boom in Lake Houston area, with new industrial space set to debut in 2019, such as Lockwood Business Park in Generation Park (pictured).

Industrial development in the Lake Houston area has increased in the last two years—and the growth is projected to continue with several large-scale logistics buildings set to bring new industrial tenants to the area in 2019.

Mark Mitchell, the president of the Lake Houston Area Economic Development Partnership, said areas of industrial development that are picking up include the Hwy. 59 corridor and Will Clayton Parkway in Humble as well as along Beltway 8 in Generation Park.

One major industrial build-out happening in the Humble area is Archway Properties’ 111-acre, mixed-use development located on Hwy. 59 between Will Clayton Parkway and Burdom Road, which will feature two separate industrial projects being constructed by different companies, Mitchell said.

“[Industrial development] is tax-based diversification; it’s job growth,” Mitchell said. “Typically it’s not going to put a burden on the city or the school districts in terms of the growth, so we get kind of the best of both worlds.”

The city of Humble has been vying to attract companies in the logistics sector—which includes distribution, warehousing and fulfillment services—for several years, Stuebe said.

The city’s lack of zoning and proximity to major transportation hubs makes Humble a prime location for this kind of industrial activity, Stuebe said.

“We’re the last green part of the county that’s not concrete, paved over and taken already,” he said. “It’s also the strategic location between the airport, the Port of Houston, and access to the rail and the interstate.”

One project that will soon debut in Archway Properties’ development on Hwy. 59 is Air 59 Logistics Center, a 685,400-square-foot space will open in August or September 2019.

Another is Parc Air 59, a 20-acre logistics development by real estate company Jackson-Shaw, which was completed in early March. Grant Pearson, the vice president of development at Jackson-Shaw, said the project was 50% preleased before it debuted, which he said indicates the area’s demand for industrial space.

Pearson said the development has signed leases with Paul Davis Restoration for space in Building 3, which moved in March 1, and an undisclosed Porter-area company that produces synthetic lubricant. He said the company is set to move into the spec building June 1, after press time.

“There’s a ton of new residential developments and old, established residential neighborhoods along [Hwy.] 59 and in the Lake Houston area,” Pearson said. “A lot of the types of the tenants ... that our product type caters to want to be close to the residential growth.”

McCord Development President Ryan McCord said the building is already 60% preleased by an undisclosed company that will make the park its North American headquarters and manufacturing warehouse.

“Many of the companies locating in the area are locating here because of the workforce, because key decision-makers live [here], and because they’re attracted to the quality of the employee base that lives in and around Lake Houston,” McCord said.

To contribute to the growing logistics workforce in the Lake Houston area, local colleges intend to implement workforce programs tailored to the job needs in the area, officials said.

“We’re surveying the area, looking at what the [workforce] demands are,” Williamson said. “We’re thinking logistics, transportation and cybersecurity are going to be big players in that area.”

The Lake Houston area currently has 3.7 million square feet of ongoing industrial development, which includes health care, manufacturing, mixed-use space, and the distribution, logistics and fulfillment sector, Mitchell said. He said the area can expect to see 5,000 retained and new jobs from the industrial growth.

“We’ve got more ability to say, ‘Look, we’ve got a fairly large pool of people that would likely ... be willing to take a few more dollars an hour to come to this sector, as opposed to staying in the service sector,’” Mitchell said.