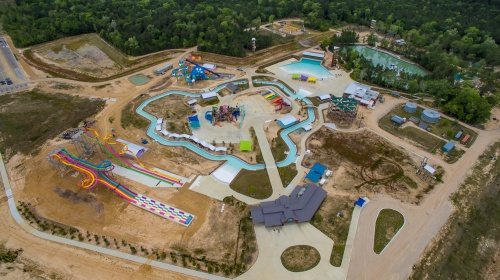 Grand Texas’ first two attractions, Big Rivers Waterpark and Gator Bayou Adventure Park, will open for its inaugural season May 25. Located near the intersection of Hwy. 59 and Hwy. 242 in New Caney, the 632-acre park is set to also feature a waterpark, an adventure park, a theme park as well as retail space and a Sportsplex upon completion.

“We’ve got enough room to expand for the next 30 years—so we’ll be expanding; there will be construction, and we’ll be adding things for the next 30 years,” CEO Monty Galland said in a phone interview. “Right now, we’ve got everything you’d expect from a premium waterpark, and then we’ve got lots of things that you wouldn’t expect, like the alligator habitat, like the zip line [and] the challenge courses.”

Grand Texas will host an invitation-only soft opening May 18, although the public is invited to attend the grand opening scheduled for May 25, Grand Texas officials said.

Grand Texas originally debuted Gator Bayou on Nov. 3 and had 5,422 guests visit and explore the park, Galland said. While the park remained open on weekends through the end of December, he said the company chose to close the park at the end of 2018 to open it with the waterpark portion.

“It was really a plan to try and figure out operational issues, resolve those and expose people to the park who hadn’t otherwise seen [it],” Galland said. “We closed at the end of the year and were going to reopen spring break, but we decided with all the construction going on the waterpark aspect, it would just make a mess operationally.”

Included in the price of daily admission, park goers can have access to a petting zoo, catch-and-release fishing, an educational alligator exhibit and a giant maze, Galland said. Daily admission is $44.99 per person, and children under 48 inches tall gain admission for $34.99, he said.

Additionally, Grand Texas will host an on-site hiring fair from 10 a.m.-2 p.m. on May 4 to hire 500 part- and full-time employees for the parks. According to Grand Texas officials, the company aims to hire individuals for various positions, including lifeguards, zip line and rope course attendants, and cashiers. Interested applicants can visit www.bigriverswaterpark.com/jobs for more information on available positions.

Upon build-out, the development will also feature the Grand Texas Theme Park, mixed-use retail space, The Groves Factory Outlets and a Sportsplex—an area of the property consisting of tournament-quality sports fields and multiuse areas. Galland said construction on the Grove Factory Outlets is set to break ground this summer, and the company is still looking for an operator for the Sportsplex.

Furthermore, Galland said an undisclosed large retailer recently closed on a 38-acre, mixed-use site at Grand Texas. Galland said the developer plans to break ground on the multiuse space once construction on the widening of Hwy. 242 begins—which he said is scheduled to begin in June.

Grand Texas will also soon move forward on infrastructure projects to aid in the future build-out of the park, such as extending Speed Street to form a connector road between Hwy. 242 and the Hwy. 59 southbound feeder, adding water and sewer lines and detention ponds.

“As we get the waterpark operational and we perfect that operation, we’re putting in infrastructure at the same time to get ready for construction of the amusement park," Galland said. "It’ll certainly be a few years before it opens, but we’re getting there. The infrastructure will take place over then next year—that will be the biggest jump-start on development and construction of Grand Texas Theme Park."