The city of Humble has been investing in improvements to its four parks, such as Schott Park. (Kelly Schafler/Community Impact Newspaper)

Local business leaders and community members gathered virtually May 6 at Humble BizCom, an event hosted by Partnership Lake Houston. The speakers, which included Humble city officials, a city of Houston official and a representative with Archway Properties, discussed local projects, campaigns and developments in the Humble area.

"We've been very busy over the last few years updating all of our parks," he said. "One thing that I challenged our Parks Director Jeremy Mittag and his crew [with] was developing parks that are more vibrant and more inviting to our community and our visitors."

The city of Humble also has plans to continue improvements at the parks, including planting new shrubbery and flower bushes, removing dead trees and updating signage in and around the parks, Stuebe said. 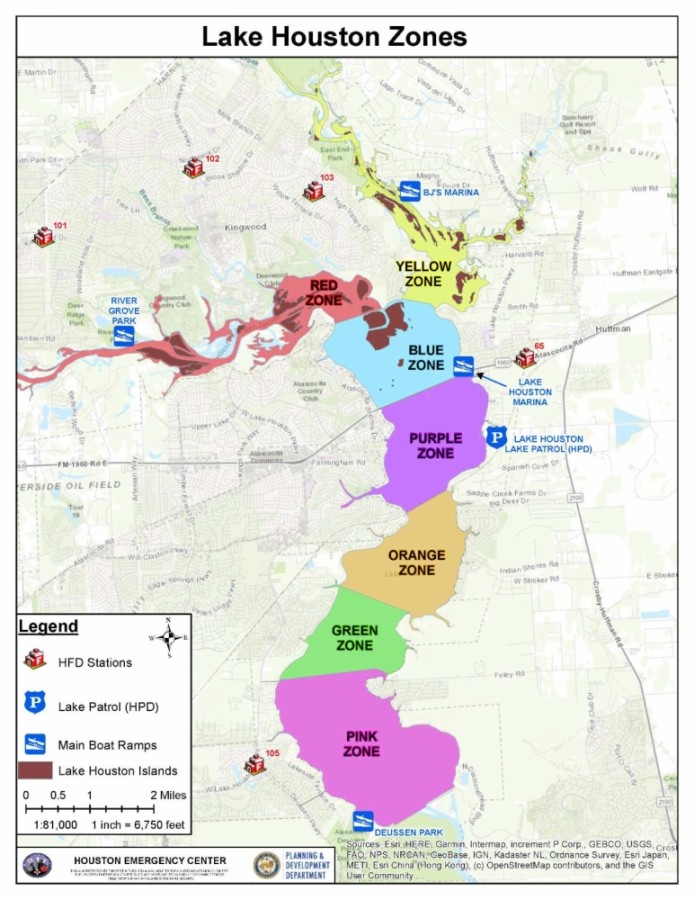 Jessica Beemer, chief of staff for Martin, said the city of Houston collaborated with local first responders for a year to create the safety plan. The plan separates Lake Houston—and parts of the east and west forks of the San Jacinto River—into seven color-coded zones.

The zones will help boaters and residents identify geographic areas of the lake by colors so that when an emergency call is made, first responders are able to locate individuals in need of assistance. Signs will soon be installed on bridges to indicate the color zones of the lake, and community members can also request wrapped signs for boat docks, boat ramps and fishing piers, Beemer said.

Community members can visit houstontx.gov/knowyourzones to print out a map of the zone and boat safety tips.

Ben Allen, partner with Archway Properties, talked about new tenants set to join Park Air 59, an 111-acre mixed-use development at the northeast corner of Will Clayton Parkway and Hwy. 59 in Humble.

In addition to Enterprise Holdings and Greater Houston Kidney Clinic joining the development next year, Allen also hinted to a new e-commerce retailer set to occupy the Air 59 Logistics Center, a 685,400-square-foot building that was completed in 2019.

He said the goal has always been for the large building to be occupied by a single tenant. Now, the vision is coming closer to realty, as an undisclosed tenant could soon be announced for the space.

"We are negotiating a lease currently for one tenant to lease the entire building," he said. "It's an e-commerce group—not the big one that we all know—but it is an e-commerce retailer. [We] expect to be able to announce something on that here in the next few weeks."