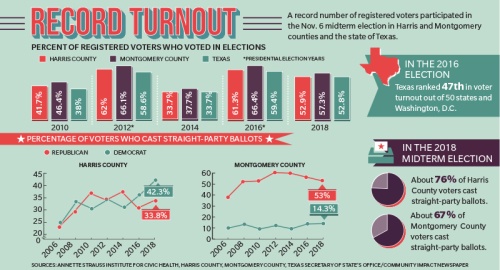 Spurred by debates regarding national politics and a competitive statewide senator race, a record number of Harris County voters cast ballots in the Nov. 6 election, which led to Democratic candidates winning the majority of contested county races, according to county election data.

This includes the race for county judge, in which Republican incumbent Ed Emmett lost to Democrat Lina Hidalgo, who has not previously served in a political office.

“When you combine [the proportion of straight-party ballots cast and the gap between Republican and Democratic voters], it made it virtually impossible for any countywide Republican to win,” Jones said.

More residents in Harris and Montgomery counties voted in the Nov. 6 election than any previous midterm election in county history and every presidential election aside from the 2016 election.

Jay Jennings, a researcher at The University of Texas’ Annette Strauss Institute for Civic Life, said the polarizing nature of President Trump and national politics motivated many residents to vote.

“He isn’t popular with a certain demographic, and [he is] very popular among another, and so in Texas’ case that helped turnout on both sides,” Jennings said.

Additionally, Jones said there were races up and down the ballot that helped drive turnout—aside from the competitive race between O’Rourke and Cruz­—such as the race for U.S. District 2 representative, which includes much of the Lake Houston area. Republican Dan Crenshaw defeated Democrat Todd Litton in this race by about 7 percent.

As the head of an organization that promotes civic engagement, Linda Cohn, League of Women Voters-Houston area president, said she had a feeling voter turnout would be higher than in normal midterm elections this year before the primary elections in March.

“I think that for this year the sense that elections matter was more acutely realized than in the typical midterm election,” Cohn said. “Everything seems to be tinged by national events, and perhaps that’s why we had such a high turnout.”

Vlad Davidiuk, Harris County Republican Party communications director, said he believes this difference in straight-party voting is how longtime Republican incumbents, such as Emmett, lost their bids for re-election.

In a press conference after Commissioners Court on Nov. 13, Emmett also attributed his loss to the high number of voters who cast straight-party Democratic ballots.

“You have straight-ticket voting where [76] percent of the people vote straight-ticket, and the margin of Democrats over Republicans is 105,000, and the county judge position is buried way down in the middle of the ballot,” Emmett said.

Hidalgo said straight-party voting may have helped elect her and other Democratic candidates, but not by accident.

“We spent our campaign resources running television ads ... about Democratic values and the importance of voting for the entire ticket,” she said.

According to the National Conference of State Legislatures, Texas is one of only eight states in the country that offers straight-party voting. However, this ballot option will no longer be available after Texas lawmakers passed a bill during the 85th legislative session to end the practice in 2020.

Two other Republican county officials, County Clerk Stan Stanart and District Clerk Chris Daniel, also lost their bids for re-election. In addition to these races, Democrat candidates won all of the 59 contested judge positions on the ballot, according to county election data.

Jones said he does not believe the changes on Commissioners Court will affect how the county is governed because each commissioner functions independently in his or her precinct.

“How [Commissioners Court] has traditionally functioned, it has provided a tremendous amount of autonomy for each commissioner,” Jones said.

Jones said he believes the changes in the state Legislature will force lawmakers to focus more on nonpartisan issues that most Texans would like to see addressed, such as reforming public school funding and infrastructure.

“Because of the combination of the loss of … seats as well as many Republicans becoming more nervous about their future electoral fortune, I think there’s going to be a tendency to focus more on bread-and-butter issues,” Jones said.

Voter turnout in the Nov. 6 election was historically high in Texas, where 28.3 percent of residents who were eligible to vote participated in the 2014 midterm election, according to data from the United States Elections Project.

According to the 2018 Texas Civic Health Index co-authored by Jennings and released by the Annette Strauss Institute for Civic Life, Texas ranked 47th out of all 50 states and Washington D.C. in voter turnout in the 2016 election.

Jones said there are three key demographics that affect the likelihood of a person voting— age, income and education.

“Texas has a younger population on average compared to most states,” Jones said. “It has a poorer population [and] less well-educated population.”

Precinct 590, which is located in Kingwood, had the highest voter turnout rate of all precincts in the Lake Houston area with about 70.8 percent of registered voters in the precinct casting ballots in the election.

The precinct is located within ZIP code 77339, which of the eight Lake Houston area ZIP codes, has the second oldest median age and the largest population percentage of residents with some college experience, according to 2016 U.S. Census data.

Precinct 334, which is located south of FM 1960 and west of Hwy. 59, had the lowest voter turnout rate in the Lake Houston area, with about 35.5 percent of registered voters casting ballots in the election.

The precinct is located within ZIP code 77338, which has the second-lowest median income and third-lowest median age of all Lake Houston-area ZIP codes, according to 2016 U.S. Census data.

Jones said for individuals with a higher income it is usually easier to time take off work to get to the polls and vote.

“The higher your income ... voting for you is a much less costly exercise than it is for somebody who works from 8 a.m.-6 p.m. every day and can’t get any time off and doesn’t have a car,” Jones said.
The state could help overcome some of these hurdles by making voting an easier process, such as allowing residents to register to vote online or register to vote on Election Day, Jennings said.

Although voting is important, it is not the only form of civic engagement, Cohn said. There are ways for residents to get involved with the politics affecting their communities outside of Election Day.

“Civic engagement doesn’t begin and end with elections,” Cohn said. “You can go to the school board meeting … or City Council. We don’t need to sit on our hands until Election Day.”