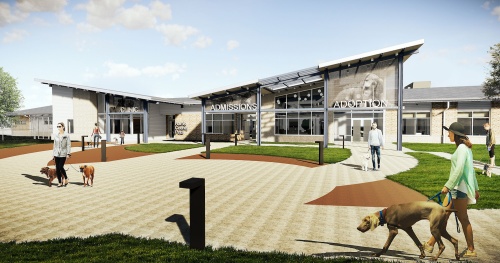 Harris County will begin construction on its new $24 million animal shelter Nov. 5, which will increase the county's ability to take in and house dogs and cats.

The existing facility is equipped to hold 150 dogs and 100 cats but is often forced to house close to 200 of each animal. Michael White, the Harris County Animal Shelter director, said the new shelter will have the ability to hold 315 dogs and 210 cats.

When the Harris County Animal Shelter was built in 1986, it was designed to handle 12,000 animals annually. Last year the shelter handled more than 18,000 animals. White said to make up for the lack of space, the shelter often houses multiple dogs together in one kennel.

“To me, [housing four or five dogs together] is totally unacceptable, but the only alternative we have is to euthanize,” White said.

The new 48,000-square-foot shelter is being built on the same property as the existing shelter at 612 Canino Road, Houston. Construction of the facility is being funded by a $24 million bond referendum that voters approved in 2015.

According to a press release the shelter will include a medical clinic, a walking trail, an isolation care unit and four dog parks. White said construction is scheduled to take up to one year with the new shelter opening by the end of 2019.

White said he will need to add about 30 employees to his current staff of 68 to operate the facility, but he has not been told how many people the county will hire.

The Harris County Animal Shelter has improved the rate at which animals leave the shelter alive over the past seven years. According to county data, the shelter's live-release rate increased from 15.1 percent to 78.8 percent between 2010-17.

White attributes this improvement to various programs that have been implemented in recent years as well as an increase in how often the shelter works with rescue and foster-care groups.

"I can’t emphasis enough the importance of foster homes because it gets [animals] out of the shelter," White said. "The shelter situation is stressful, and they’re much more likely to get exposed to disease, so if I can get them out of the shelter right away and into the foster home, they become better and more adoptable."