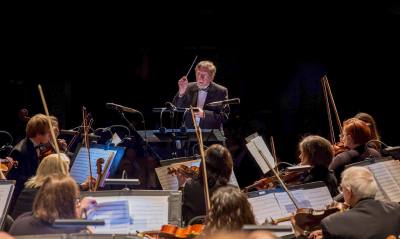 The Kingwood Pops Orchestra is one of many performing arts groups in the Lake Houston area.

Jennifer Wooden, director of the Charles Bender Performing Arts Center in Humble, said the push for more performing arts events was simultaneous with the Lake Houston Area Chamber of Commerce rebranding in 2012 to connect the Humble, Kingwood, Atascocita, Summerwood and Fall Creek areas under the umbrella of “Lake Houston.”

The city of Humble took over ownership of Charles Bender High School from Humble ISD in 2014 and renovated it into the 350-seat Charles Bender Performing Arts Center. Wooden said the city’s roughly $4 million investment toward the building created a thriving venue in downtown Humble that hosts a monthly concert series, theater, musicians, dance troupes and classical music performances.

“I think having the arts in an area really adds richness ... [and] culture to an area—and that’s something that was lacking,” Wooden said.

Although the performing arts groups are growing, the groups face challenges when it comes to finding proper performance space, keeping the community engaged in the arts and funding their growing organizations.

The performing arts community had been growing prior to the center’s renovation, with organizations such as The Kingwood Pops Orchestra, Centre Stage Theatre Company and The Lake Houston Musical Arts Society—which comprises The Kingwood Chorale and Chamber Orchestra and the Kingwood Big Band—debuting in the 1980s.

Past performances have included patriotic, Broadway and jazz pieces. More recently, however, the group has focused on attracting more families to the shows by incorporating Disney, comic book and movie themes, she said.

“Kingwood Pops brings a service to those who love music, and an opportunity to play in an orchestra or to sing with an orchestra,” Forys said. “People have a passion for music.”

The Nathaniel Center, which was built in 1986, serves as a multiuse center used for performances, conferences, weddings and graduations, said Chris Sarvadi, director of operations for the Nathaniel Center. The venue has a stage and is able to accommodate 500 chairs during shows for local performing arts groups, Sarvadi said.

Despite the number of longstanding performing arts organizations in the community, groups agreed the Lake Houston area does not have a facility able to seat large audiences.

While the Lake Houston area has both the Charles Bender Performing Arts Center and the Nathaniel Center, David Livingston, chairman of The Kingwood Chorale and Chamber Orchestra, said neither is structured for classical chamber music.

The Kingwood Chorale and Chamber Orchestra is a group of 80-90 that sings classical chamber music. The group—along with the The Kingwood Big Band that primarily performs jazz numbers—make up the LHMAS.

The LHMAS depends on its partnership with Lone Star College-Kingwood for rehearsal space—which was one of the only spaces at the college not devastated by Hurricane Harvey. Livingston said they also perform at local churches that have proper acoustics.

“One of the problems with that is the publicity goes out, and people see the Kingwood Chorale performing at [a church], so I think a lot of people think, ‘Oh the church choir is singing,’” Livingston said.

“The biggest problem for theatrical productions is to have a performing space with proper lighting, sound and theater systems that include a fly system and a high hat ... to install a counterweight system to fly scenery and backdrops,” Dean said.

In 2009, LSC-Kingwood was a proposed location for a concert hall that community organizations and students could use. The LSC-Kingwood Performing Arts Advisory Council proposed the Lone Star College System board of directors construct a concert hall at the college, per meeting notes.

Meeting notes showed a consultant said a 1,000-seat concert hall could be built for roughly $27 million to meet the college’s and community’s needs.

Todd Miller, music department chair at LSC-Kingwood and artistic director and conductor for The Kingwood Chorale and Chamber Orchestra, said when the economy downturned in 2008, the concert hall was put on hold.

“[It] would be able to accommodate the Kingwood Chorale and Chamber Orchestra, the Kingwood Pops Orchestra … [and be] a special place for local high school bands,” he said.

Despite the lack of a larger venue designated for performing arts groups, organizations in the Lake Houston area are still thriving—even in spite of Hurricane Harvey’s impact on the area.

Livingston said for the LHMAS—and for many other local organizations—a majority of funds come from donations and corporate matchings and a third of funding comes from ticket sales.

On the other hand, Forys said The Kingwood Pops Orchestra relies heavily on donations and ticket sales. Other funding comes from its partnership with the Houston Arts Alliance, although she said they will no longer receive funding from the alliance after this season, as its performance venue, The Nathaniel Center, is outside of the city of Houston’s boundaries.

To make up for the loss of funding, the orchestra increased its ticket prices for the 2018-19 season from $10 to $15.However, Forys said she believes performing arts is an affordable leisure that adults, children and families can enjoy.