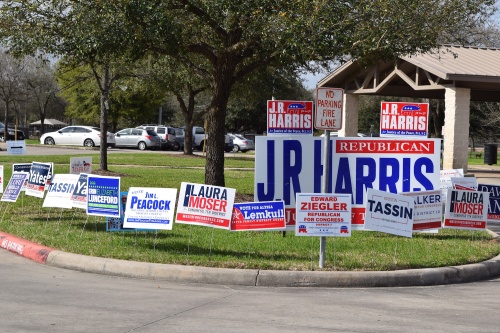 Katy residents went to the polls over the last few weeks and today and approved a bond package to be used to improve drainage and sewer capacity in the city.

City of Katy voters overwhelmingly approved three bonds totaling $19.5 million Saturday. The bond package is broken down into three propositions that will pay for drainage and sewer system improvements throughout the city.

All three propositions passed with about 88 percent of voters voting in favor of the bonds.

“On the bond package it’s just outstanding that our citizens voted for all our bonds, which will make the city stronger,” Katy Mayor Chuck Brawner said.

The bond package included two bonds, Propositions A and B, to facilitate drainage and flood-mitigation improvements to the areas around the Pine Forest and Riceland Terrace subdivisions as well as elevating the First Street bridge just west of Avenue D, according to city documents.

Proposition A is worth $4.25 million and will be used to elevate the bridge, which will cost about $1.25 million, and the remainder will go to fund drainage improvements along Katy Hockley Road, according to City Administrator Byron Hebert.

Proposition B will raise $10.25 million and will be used to implement drainage improvements near the Pine Forest and Riceland Terrace communities, as well as a 14-acre expansion of the Pitts Road detention pond north of town.

Brawner expressed some disappointment in voter turnout with less than 2,000 residents voting throughout the city of about 17,000, but he was grateful that the bonds passed because they were an important step in improving safety and ensuring smooth growth throughout the city.

Proposition C will raise $5 million and will be used to improve the city’s wastewater treatment plant south of I-10. Brawner said the upgraded capacity is necessary due to large industrial companies like Amazon.com Inc. moving in and the residential growth the city is seeing.

Brawner said the city will move forward with the projects quickly, using the city’s reserve fund in some instances to expedite the work until the bond money becomes available. Plans for the Pine Forest subdivision will come first, and the city has received more than $1 million from the state to help expedite projects in the Riceland Terrace community near Morton Road.

“We’re looking at several months, probably in the latter part of summer before those bonds are actually sold, so we’re going to use city reserves to construct the drainage system in the Pine Forest area,” Brawner said.

For more details on the bond package and drainage improvements, click on Community Impact Newspaper's coverage here.
SHARE THIS STORY