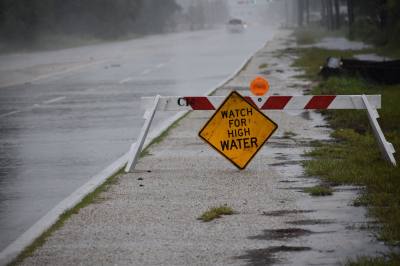 The National Weather Service predicts showers and thunderstorms May 7-9 and potentially through the weekend in the Southeast Texas region. The storms could also produce tornadoes, strong winds, hail and street flooding.

“As you all know, we are going to have rain over the next several days,” Fort Bend County Judge KP George said during Commissioners Court May 7. “Don’t be panicked.”

George said the county’s Office of Emergency Management is activated at a readiness of Level 3, meaning officials are constantly monitoring the Brazos River and rainfall as it comes throughout the week. The OEM is also conducting regular drone outings to asses the situation and is working with homeland security to communicate with all county jurisdictions, George said.

“We want to make sure drainage districts, roads and bridges are ready just in case we need to activate pumps and things of that nature,” he said.

The city of Katy Office of Emergency Management is watching the southern storms moving north, according to a Facebook post.

"Torrential rainfall is occurring with these storms, and may lead to localized street flooding," OEM wrote in the post. "These storms are also capable of producing winds in excess of 40 mph."

Wendy Duncan, a director of the Willow Fork Drainage District, posted on Facebook that there is no concern for structural flooding in the Cinco Ranch area. The Barker Reservoir and channels, she said, have capacity for the 6-7 inches of rain that is predicted over the next five days.

In Fulshear, city staff are also actively monitoring the Brazos River, according to the city’s Facebook page. Based on weather predictions, flooding may occur but predictions can change.

As of 3:30 p.m., water had not crossed Red Bird Lane, which is the city’s indicator that the Brazos River has crossed the banks. The city cautioned residents on Country Lane and Shady Lane in particular to be to be careful.

Check city and county social media pages for the most up-to-date weather information, and visit traffic.houstontranstar.org to see where high water might be on the roads.
SHARE THIS STORY