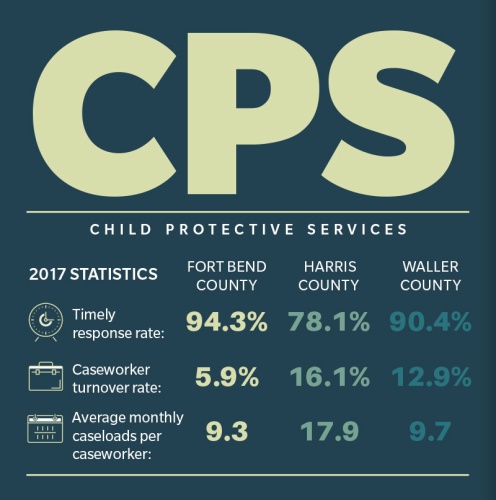 Now that state legislative measures from 2017 addressing a series of critical problems in the Child Protective Services system are in full effect, recent data shows conditions for CPS investigators, who look into abuse and neglect of children, have improved across the board.

The state of Texas in late 2016 approved funding and undertook other legislative measures to address caseworkers leaving their jobs at excessive rates. Additionally, caseloads were so high it made it difficult for caseworkers to check on some vulnerable children in a timely manner.

Children’s advocacy groups that have been pushing for reform have acknowledged these improvements supported by data tracked by the state. Salaries are one-third higher, turnover rates are down and caseworker responses to reports of abuse or neglect are timelier than their recent lows in 2016.

However, the number of cases reported continues to rise, and challenges still exist to alleviate pressure on the state and local foster care system, according to local child welfare advocates.

In Fort Bend County in 2017, 5,370 children were reported to Texas CPS as alleged victims of abuse or neglect. That is a 46 percent increase from 2013. Likewise, Harris County has seen an increase of about 28 percent of reported cases in five years, and Waller County experienced a 13 percent increase.

“More reports of abuse or neglect are being made,” said Tejal Patel, media relations specialist for the Texas Department of Family and Protective Services. “That means the community is looking out for each other and making a report if they suspect a child is being abused or neglected.”

Over the past five years turnover rates and the average caseload per worker decreased in all three of Katy’s counties, state data shows. Additionally, the percentage of children who were checked on in what the state considers a timely manner—under 24 hours and 72 hours—improved both in Fort Bend and Harris counties over the five years.

Yet resources are still strained. Child Advocates of Fort Bend, an organization that matches abused children with Court Appointed Special Advocates and serves as a Child Advocacy Center, has seen a sharp increase in children coming in for forensic interviews, CEO Ruthanne Mefford said.

“I think it’s a true statement to say that CPS caseworkers are overworked,” Mefford said. “They have very high caseloads, and it can be very challenging, very difficult work. Increasing their salary was a beneficial thing primarily for retention of CPS workers. That’s important because then you have workers who you have more continuity with. They become more experienced and better-trained and so forth, so that continuity and all of that will help them do their job better.”

Amber Robinson agrees that CPS caseworkers are overworked.  She is the mother of two adopted and two fostered boys and as the president of Tapestry—a ministry from Kingsland Baptist Church in Katy that provides support and resources for families considering fostering or adopting—and she has worked directly with CPS.

“I’d like to see more investment in and training for caseworkers,” she said.  “It’s a high-stakes job. Children’s lives are on the line, and you can’t afford to take the job lightly.”

Senate Bill 1806, passed in late 2017, called upon professional reporters, such as teachers, health care professionals, and day care workers, to send children who report abuse to a CAC to be interviewed, creating an increased need, Mefford said.

“Senate Bill 1806, which requires the children to be brought to an accredited CAC for the interview—that definitely has contributed to the increases,” Mefford said. “Secondly was when we were assigned the responsibility of reviewing all state intakes of child abuse, and that happened a couple of years ago. That really increased our numbers at that time.”

“All cases have increased since the hurricane,” Hastings said. “People are stressed and worried.”

Bernal explained that after a disaster people work to restore their lives back to the way they were before the disaster. But Hurricane Harvey did a number on many families, and returning to that same level of income—even a year later—is not possible for many in the Katy area: Some children are not receiving enough food or living in unsafe conditions because that is all the parents can afford.

Both Bernal and Hastings said that the stress of not being able to provide basic needs for one’s family can manifest itself into domestic violence. Katy Christian Ministries provides many resources for families to help them overcome financial hardship as well as services to survivors of domestic and sexual abuse.

At CAFB the majority of cases received result in a child receiving services, Mefford said.

“For a child to speak out and to say something happened to them—it almost takes more courage,” she said. “It’s almost harder to let someone know than it is to be silent.”

By age 18, 1 in 4 girls and 1 in 6 boys have been abused; however, only 10 percent have spoken out on average, Mefford said. As CAFB and KCM continue to receive more cases, the need for support has become greater.

For the upcoming legislative session in 2019, local organizations are looking into community needs to determine agenda items to request.

State Rep. Rick Miller, R-Sugar Land, who was re-elected Nov. 6, is looking to pass CPS legislation that focuses on the trauma each child experiences. This would involve trauma-informed care training and other practices to be put in place throughout the CPS system, Miller said.

Community Impact Newspaper reached out to several Katy-area legislators, but none responded for comment.

While significant progress may have been made during the last legislative session with regard to child welfare, local advocates hope progress will continue in 2019.