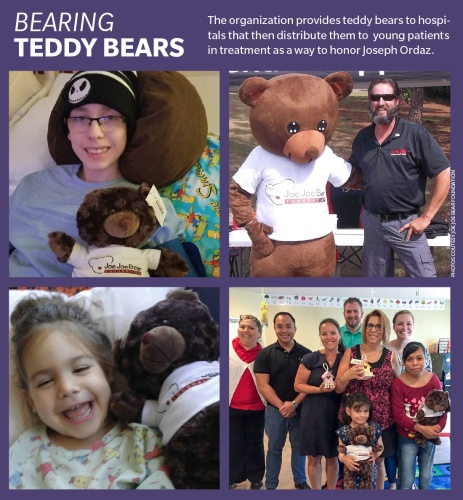 Jeanette Maurer and her husband, Albert Maurer, founded the Joe Joe Bear Foundation after their godson, Joseph Ordaz, passed away in 2009 from leukemia at the age of 24. During his treatment for the disease, Ordaz—fondly nicknamed Joe Joe—had asked for a teddy bear from the Maurers so he would feel they were with him during treatment.

After Ordaz died the Maurers created the Joe Joe Bear Foundation in his honor by providing stuffed bears to young people in treatment for deadly illnesses, Jeanette said.

“Parents can’t always go places that the bears can go,” Jeanette said. “We’ve had a bear that went into open heart surgery.”

When the organization was founded in 2009 in Katy, the Maurers said they expected to receive enough donations to distribute about 100 teddy bears, but the response from the community was staggering, Jeanette said. The foundation was able to distribute 1,600 bears that year.

The foundation has grown since the first teddy bear drive in 2009 and now purchases about 5,000 bears annually with donations, Jeanette said.

To date the foundation has provided more than 29,000 stuffed bears to patients hospitalized for life-threatening illnesses, she said.

Over the next year the Maurers also hope to begin offering grief management services, Jeanette said. The services will include information through the foundation’s website, online support groups using tablet computers and an app to provide resources to help with estate planning and managing medical bills.

“The immediate need is for us to get the education off the ground,” Jeanette said. “We’re also looking for office space donation in the Katy area. We need that to get these programs up and running.”