As the housing market in Katy sees rising home prices and interest rates on mortgages, investment firms have also—in the last two years—increasingly been buying land and properties to rent instead of sell, according to property data from the Harris County Appraisal District. (Asia Armour/Community Impact Newspaper)

Despite a challenging market skewed toward sellers, experts said the area remains a “highly desirable” place to live due to the area’s master-planned communities, schools and its proximity to major highways—such as the Katy Freeway, Westpark Tollway and Grand Parkway.

“One thing that [a seller’s market] does is drives up prices,’’ Wauhob said. “We have had a big increase in price over the last two years and that is due to supply and demand issues.” 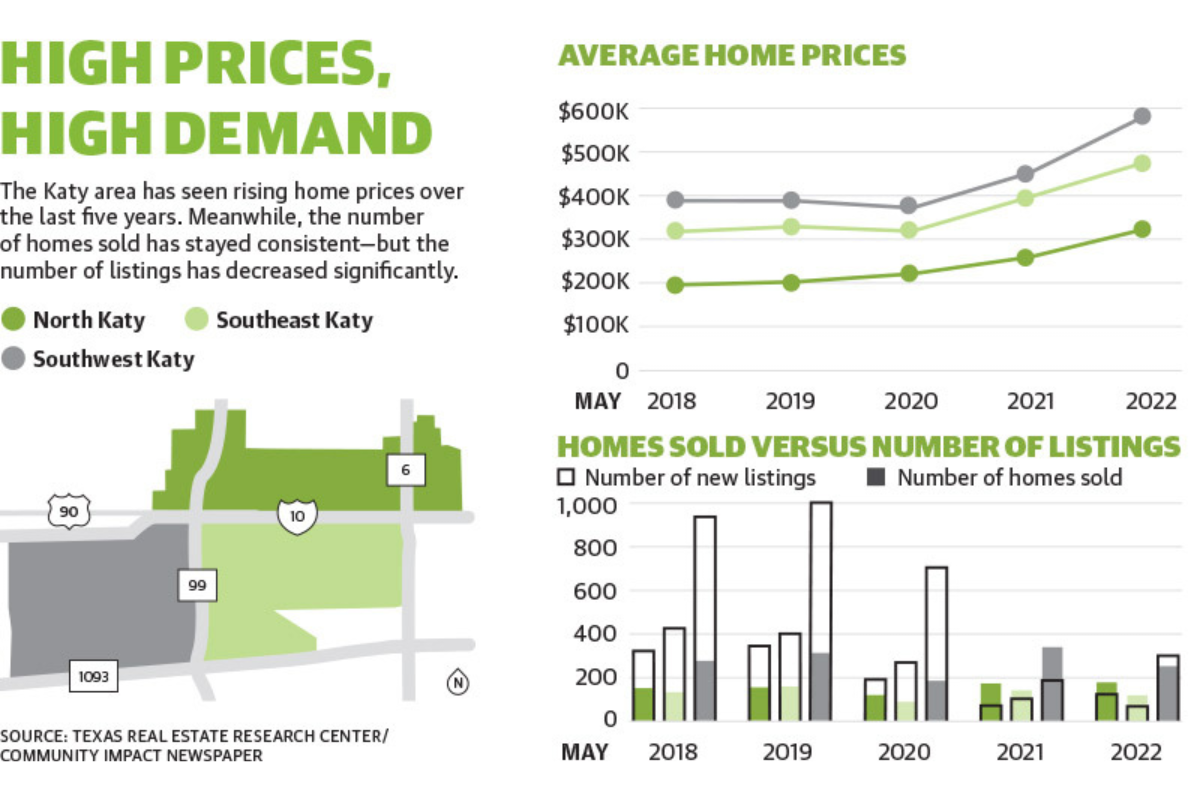 Though RE/MAX broker Charlie Russo, who works primarily in the West Houston and Katy area, anticipates prices will begin to steady, data from Texas A&M University’s Texas Real Estate Research Center shows the housing market has grown more expensive in the Katy area over the last year with the average price of single-family homes rising 27%-32% between April 2021 and April 2022, depending on the area of Katy.

Texas Real Estate Research Center data shows the Katy area’s housing inventory remains at around the lowest it has been since 2015 with a 0.5- to 0.7-month supply within the areas of Katy in 2022. Russo said when housing inventory sinks below three months in the Katy area, it represents a “hyper-seller’s market.” 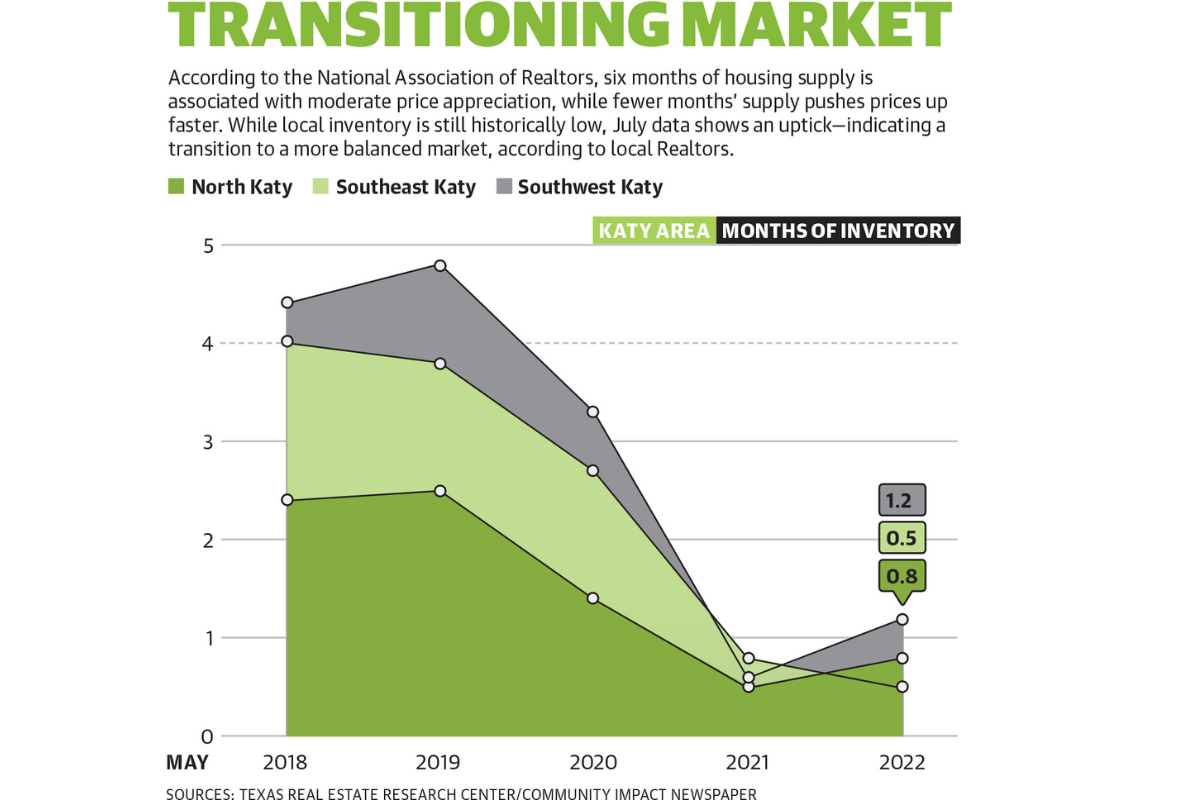 Homebuyer demand in the area, however, remains strong, experts said—especially within certain Fulshear and Katy-area neighborhoods, such as the Sunterra, Cross Creek West and Tamarron master-planned communities, which will add more than 15,000 new homes between the three developments by 2031.

“If there’s ever going to be a kind of softening of the market, the master-planned communities will continue to sell,” he said.

Low housing inventory and high demand present extra hurdles for potential homebuyers, and some have either been unable or unwilling to win a bidding war, experts said. Others have simply been priced out.

“From 2017 through 2022, we have had historically low interest rates,” Russo said. “Then all of a sudden, rates have started to increase. [In coming months] we are going to see sales falling down. The prices aren’t pulling back, even though interest rates are going up.”

The national 30-year fixed-rate mortgage hit 5.3% on July 7, according to the Federal Home Loan Mortgage Corp., known as Freddie Mac. While that rate is still low compared to historic numbers, rates have gone up almost 3% since January 2021, when the rate hit 2.65%.

Meanwhile, the demand for single-family rentals across the Greater Houston area reflects that growing homebuying hesitation. A June 15 report from the HAR showed a near 25% increase in single-family home leases in May compared to May 2021.

A 2022 Consumer Sentiment and Home Affordability Survey from the HAR released in May revealed of 600 survey respondents across the Greater Houston area, 79% of those who stopped searching for a home said they did so because they were priced out of the market, while 62% stopped searching because there was not enough inventory.

This comes as the HAR reported the median monthly price for single-family rentals in the Houston area went up 8.1% year over year to $2,000 per month. Investment firms have also—in the last two years—increasingly been buying land and properties to rent instead of sell, according to property data from the Harris County Appraisal District.

Additionally, build-to-rent communities—or new single-family rental properties that are professionally managed—are on the rise across the Houston area. Through a partnership between the developer behind Sunterra—Land Tejas—and ONM Living, construction on 114 single-family rentals will begin in August, said President of ONM Living Zac Thompson. The community, dubbed the Villas at Sunterra, is expected to be fully occupied by spring 2024, he said.

“As far as home ownership, obviously if investors are investing in these build-to-rent neighborhoods, that means they’re taking up construction crews and supplies and things like that, which we could certainly use to go towards building new homes for people for purchase,” she said. “It is kind of a newer phenomenon with these institutional investors buying large amounts of homes, but we’re going to have to watch and see how it plays out.”

But some real estate experts and developers said they believe master-planned communities could be the key to increasing homeownership.

The number of homes available at lower prices has greatly diminished, Blackburn said.

Still, the housing demand remains strong across the board, and in subdivisions such as Sunterra, home construction demand has posed a challenge for builders, who struggle to meet that need given continuous supply chain interruptions, said Tim Johnson, director of sales and marketing at Sunterra developer Land Tejas.

Nationwide numbers paint a bigger picture of the challenges faced by the homebuilding industry. According to Freddie Mac, there were 1.64 million new homes under construction nationwide in April, the highest on record. Locally, in eight counties across the Houston metro, including Fort Bend and Harris counties, that figure is about 21,000 as of June 15, said Lawrence Dean, senior vice president of advisory at real estate research firm Zonda. This is the most new homes under construction the company has ever seen, he said.

“Across the last year and a half, it’s taken homebuilders longer to build due to labor constraints but even more so constraints on building materials,” Dean said.

Sunterra plans to build 4,007 single-family homes between 2021-31, according to February projections from demographer firm Population and Survey Analysts. Meanwhile, Cross Creek West will build 3,110 new homes and Tamarron plans for 8,259 dwellings in the same time frame. 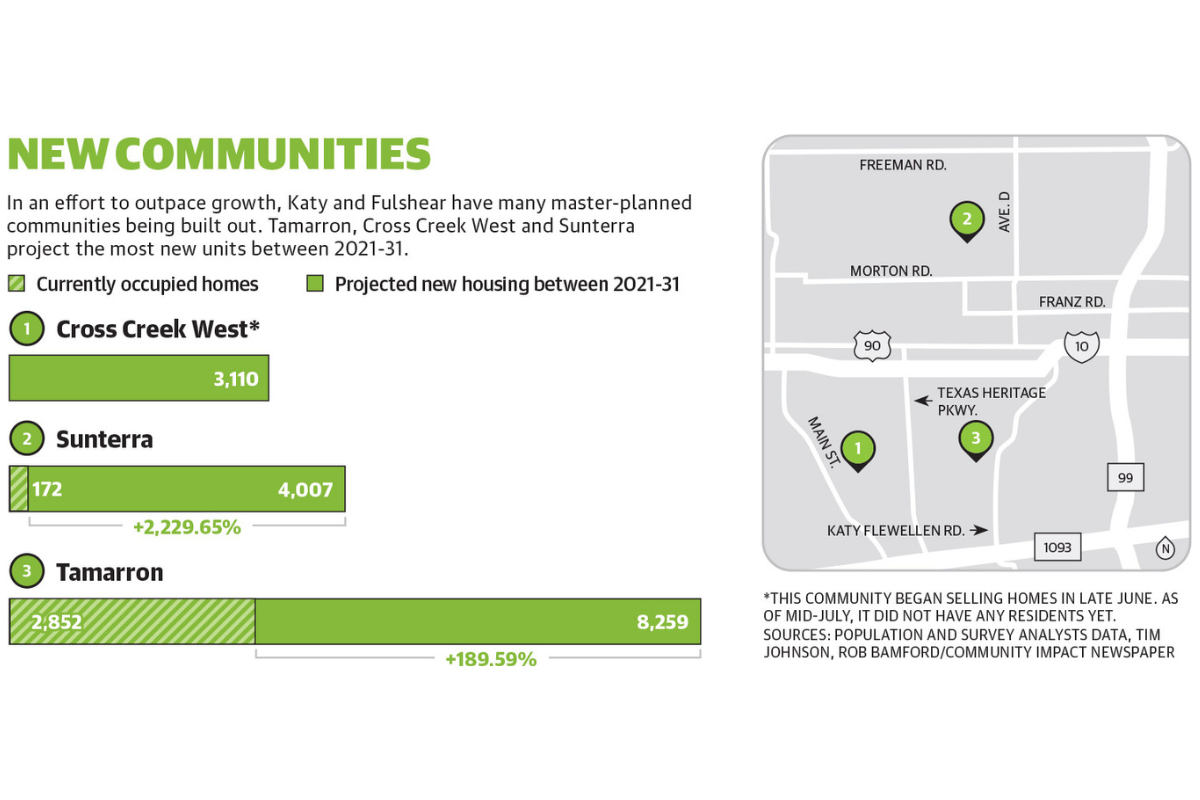 These new homes directly correlate to Katy’s increasing population. Estimates from the Katy Area Economic Development Council project the area’s population will increase from approximately 459,000 residents in 2022 to 491,000 residents by 2027.

Proximity to Katy ISD, multiple amenities, mobility options, more space and a better community feel are some of the reasons why people are moving to Katy, Fulshear and surrounding suburbs, said Rob Bamford, the general manager of the Cross Creek West and Cross Creek Ranch developments.

“There are a lot of other states and cities that are envious of our current position,” Bamford said, citing local leadership as a contributing factor. “The city of Fulshear has a great mayor that has really turned the city into a thriving, future metropolitan area. The city of Katy has such a strong presence historically with growth with Katy ISD, which is a real powerful marketing element to this submarket as well.”

Bamford said benefits to the master-planned developments include all of these, plus an opportunity for buyers to build equity.

“The whole master-planned community concept is really a function of what the American dream is hypothetically considered to be, which is building wealth,” Bamford said. “[Master-planned communities give] the buyers an opportunity to build wealth in their homes and their real estate investments.”

Asia joined Community Impact Newspaper in February 2022. She studied journalism at Missouri State University in Springfield, Missouri. Before relocating to Houston Texas, Asia was a freelance reporter for the Seattle Medium, one of the city's eldest and longstanding African American newspapers. She covers dining, transportation, government, business, development, education and more for Katy, Texas and South Houston. When she's not writing, she's likely trying a new restaurant or tv show.