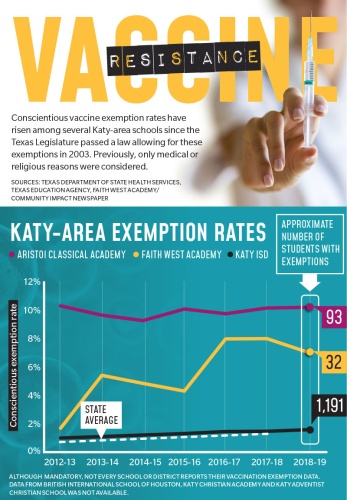 Public health officials are looking more closely at rising conscientious vaccine exemptions among school-age children as the number of measles cases nationwide and locally continues to climb this year, according to the Centers for Disease Control and Prevention.

Although in 2000 the CDC declared measles “eliminated” nationwide, 1,022 individual measles cases have been confirmed across 28 states in 2019 as of June 6, according to CDC. At least 15 of those cases occurred in Texas, four of which occurred in Harris County—the most of any county in Texas, according to Department of State Health Services data as of April 29.

At the same time, a growing number of parents in the Katy area have filed for vaccine exemptions since 2003, when state lawmakers made it legal for parents to seek conscience exemptions for their children. Prior to 2003, only religious or medical reasons were considered.

Dr. Richard Lyn-Cook, a medical director for Harris Health Pediatric Clinics, said he has experienced the trend firsthand during his 20-year tenure in the health care field.

“It is a major concern, especially in the cases of measles ... [because] a certain percentage of the population [needs to be] vaccinated in order to prevent rapid spread [of measles],” he said.

Children enrolled in public and accredited private schools are required by state law to receive certain vaccinations unless the parent submits a notarized affidavit for these exemptions, according to the DSHS.

Since the 2012-13 school year, the conscientious exemption rate at Katy-area public and private schools has increased, according to DSHS data.

“As Katy ISD sees a rise in enrolled students with a conscientious exemption, it causes concern, but data shows that such exemption will not lead to generations of unimmunized children,” KISD Director of Health Services Therese Highnote said.

“The entire state of Texas has seen an increase in vaccine exemptions for reasons of conscious in the past years,” Harmony Public School Director of Student Health Chanteeé Hale said. “A large part of this is a distrust of science-based medicine.”

However, not every local school has experienced a vaccination exemption increase. St. John XXIII College Preparatory has a conscientious exemption rate of zero because it only allows medical exemptions, school nurse Megan Burke said. And Aristoi Classical Academy’s rate decreased from 10.31% to 10.21% over six years.

When asked whether Aristoi was worried about its high vaccination exemption rate, Headmaster and Superintendent Brenda Davidson said, “We follow state law on vaccination requirements for public school attendance.”

Although mandatory to provide an annual report of immunization status, not all schools participate, DSHS Media Relations Director Chris Van Deusen said. If a school does not submit the report, DSHS performs an audit. To Van Deusen’s knowledge, DSHS does not collect the data after the audit, he said.

Schools in the Katy area that did not provide their conscientious exemption rates to the state nor responded to attempts for comment include British International School of Houston, Katy Adventist Christian School and Katy Christian Academy.

Michelle Simons is a Katy-area mom with a son on the autism spectrum. She said her entire family is vaccinated and her son was born with autism; it was not caused by vaccinations.

“Vaccine injury … does happen, but it’s much rarer than many … people would have you believe,” she said.

But some Katy-area parents, such as Jacob Jones, believe vaccinations are a personal choice. Jones said when he attended KISD, he filed a conscientious exemption.

“We are free in the wonderful USA and cannot be forced into injecting our bodies,” he said. “My mother has extensive nursing and personal experience. Several people we know had severe reactions to vaccines, including my own daughter.”

Political action committee Texans for Vaccine Choice supports informed consent, medical privacy and vaccine choice, said Jackie Schlegel, the group’s founder and executive director. She said she believes the choice to vaccinate is a fundamental issue beyond the actual vaccinations.

“It’s very, very dangerous when we start allowing the government to mandate any medical procedures ... and vaccines should be no exception,” Schlegel said.

Although state law allows exemptions, the choice to vaccinate comes with responsibilities many people do not want to face, said Rekha Lakshmanan, director of advocacy and policy for The Immunization Partnership—a Katy-based nonprofit that educates about the importance of vaccinations.

“With choice also comes the consequences, and I think that is the second part of this discussion that some people don’t want to acknowledge or face,” she said.

According to the CDC, the spread of an infectious disease is unlikely when a majority of individuals within a community are immune to the disease, called herd immunity.

Both Lyn-Cook and M. desVignes-Kendrick, director of Fort Bend County Health & Human Services, are worried about the increase of conscientious exemptions in their counties.

Measles is a highly contagious respiratory illness, Van Deusen said. Symptoms include high fever, rash and irritated eyes. In rare cases, measles can cause pneumonia, brain damage, deafness and death to adults and children who are not immune to the virus.

Van Deusen said 90% of people who come in contact with measles and are not immune will become infected; however, the vaccine is 97% effective for a lifetime after two doses in childhood.

DSHS issued a health alert in February after seven measles cases were reported across the state—including the Greater Houston area—Van Deusen said.

Lakshmanan said the current trajectory threatens to undermine the concept of herd immunity.

“Research shows that nonmedical exemptions cluster geographically—in neighborhoods, in schools and other smaller groups,” she said. “These [rate] increases are happening in pockets, like the suburbs of Houston—Tomball, Magnolia, Cypress, The Woodlands and Katy—and that’s what we worry about.”

Editor's note: This story was updated to correct a minor grammatical error.