Construction on the civic center was completed in fall 2019 as part of the Katy Downtown Plaza project. (Courtesy Chris Harris)

For $123,162, Mobil Contractors will complete the civic center by installing sidewalk connections, a shade structure and outdoor electrical components, according to agenda documentation. When these activities are complete, the city will be able to rent out the plaza. The city has previously hosted events at the center, which seats about 125 people, city leaders confirmed in January.

For $40,738, Earth First will landscape the plaza by planting elm trees, installing mulch and overseeing the irrigation system, according to agenda documentation.

The awarded bids also included funds for relocating a power pole, building a drinking fountain and installing temporary, green chain-link fencing around the water tower to prohibit public access until the outdoor museum is built around the water tower. These three bids totaled about $21,239.

A list of the five projects, their cost and the company awarded the project bid is available at the bottom of this story.

All five bids will be paid for with bonds approved by the public in 2016, per agenda documentation. So far, the city has spent about $850,000 from hotel occupancy funds and about $1.2 million in 2016 civic center bond funds, City Administrator Byron Hebert said at the meeting. 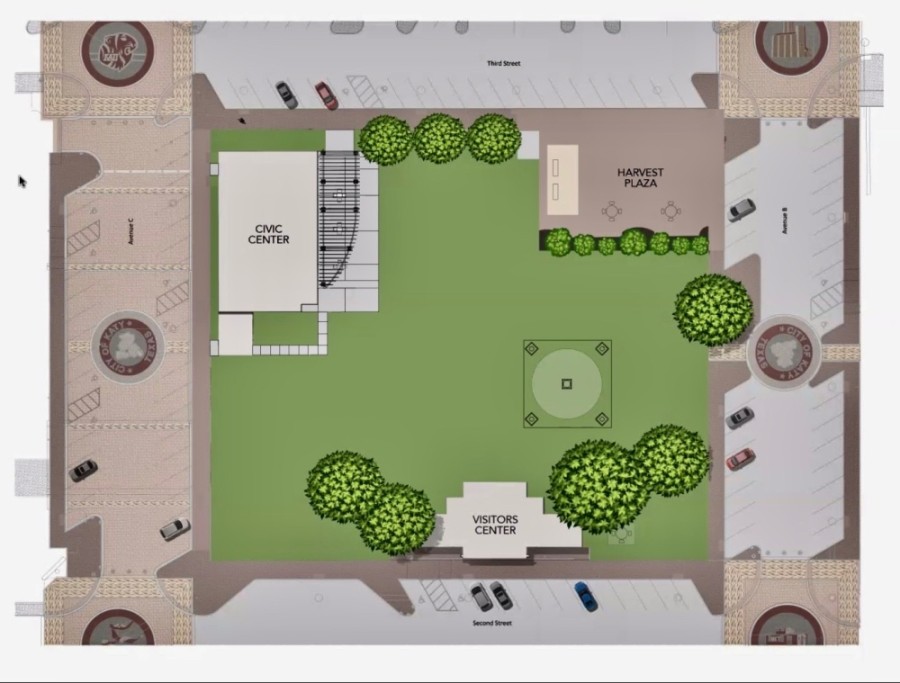 The total project cost is estimated to be $5 million, paid for via 2016 civic center bonds, hotel occupancy tax funds and insurance money from Hurricane Harvey, said Kayce Reina, the city of Katy's director of tourism, marketing and public relations, in a July 23 email.

No completion dates were discussed at the meeting.

At the July 20 meeting, Council Member Janet Courte said she was strongly opposed to the proposed chain-link fence around the water tower because she felt it would not provide enough security and would be an eyesore, especially if it will take the city several years to complete the plaza.

Reina assured her that the fence would be temporary and suggested the city could plant shrubs to hide it and make it harder to climb.

“If [the fence is still there after] five years, Janet, I’ll go out there with you, and we can ... put a wood fence out there,” Council Member Frank O. Carroll III said.

At the meeting, a resident identified as John D.R. asked why this project was not finished in 2019.

"Many of you said multiple times and in news articles this whole entire job would be finished in 2019," he wrote in the chat feature of the virtual Zoom meeting. "It’s middle of 2020 and that was way before COVID[-19]."

Reina replied at the meeting that the city was able to save construction costs by building the civic center and visitors center at the same time rather than splitting the project up into two phases, but this decision delayed the project.

“The completion date actually was supposed to be sooner,” Reina said. “And then, of course, we've had Harvey and lots of other things that [have] delayed projects across the board—and then, now, COVID[-19].”

In January, Reina said the plaza project was on schedule with no delays, adding that construction for the civic center and visitors center buildings was completed in October for the Katy Rice Festival.

In the email, Reina said the remaining projects for the plaza include the following.


The Katy Downtown Plaza is the third phase of a revitalization project for Katy’s downtown. Discussions about developing a downtown district began in the early 2000s, but rain events in 2016 and 2017 delayed the city’s long-term goal of revitalizing the downtown area, as council members previously told Community Impact Newspaper.