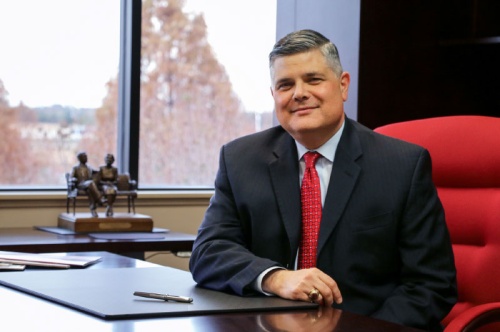 Jay Neal will serve as the associate vice president and chief operating officer for the new University of Houston Katy campus that will open in 2019. Neal has served in the same role at the Sugar Land campus since Jan. 1, and said when the opportunity to also lead the Katy campus came, he had to take it.

“The incredible opportunity that I just couldn’t pass up is they’re building two campuses,” he said.

Neal earned his bachelor’s degree in restaurant and hotel management from UH in 1991 and was working in the field when the economic downturn hit, he said. Two financial firms near the restaurant he was running at the time collapsed during the downturn.

“When they collapsed, it ended up costing me 200 [tables of customers] a day, and I was like, ‘OK, maybe it’s time for something different,’” he said.

Neal returned to UH in 2004 for his master’s degree and later obtained his doctorate in food microbiology from Texas A&M University in 2009. He said although the choice made sense at the time,  academia enticed him away from that.

“I started teaching first before doing research, and I just fell in love with the students,” he said.

Neal continued in the field of academia, and in 2009, took a provost position at UH’s Conrad N. Hilton College of Hotel and Restaurant Management in San Antonio. About a year later he moved back to Houston to serve as the provost at the UH Sugar Land campus.


Focus on the students

Neal’s primary focus as the Katy campus moves forward is student success, he said. He looks forward to bringing a college that provides a tier one education to the Katy area and working with industry leaders to offer opportunities for students to build careers.

“I know that may sound cliche, but that’s the focus,” he said. “When we focus on the students, everybody wins.”

Pairing graduates from a high-performing school district like Katy ISD with industry partners in both engineering and nursing is exciting, he said. Both the energy industry and Katy-area hospitals are eager to hire Katy ISD students.

“It’s a great opportunity for [energy and medical companies] as well.”

“The key thing–as far as what they can expect from me–is someone who listens,” Neal said.

Neal said a rapport with students gives him information he needs. Answers to questions about improvements to curriculum, facilities and staffing help improvement of the campuses in his charge.

Neal said he understands there is significant pressure for students to perform well. He has seen fear of failure become more of an issue. As a result, he is working to build an environment for students that will provide opportunities for success. These opportunities include internships, externships and networking events.

“Every time I put a bar out there for students to meet... they always exceed my expectations,” Neal said.
SHARE THIS STORY