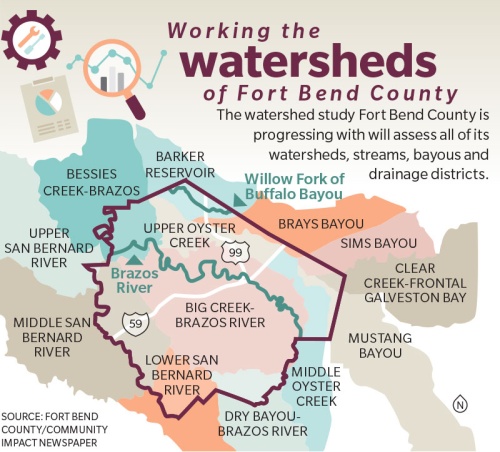 Fort Bend County Commissioners Court approved the continuation of a countywide, 18-monthlong watershed study June 5. The study will give the county a framework for developing a long-term bond program to fund improvements and prevent losses from future storms like Hurricane Harvey, officials said.

All of the county’s streams, creeks, bayous, drainage districts, levee districts and infrastructure within the watershed will be studied. During a legislative update speech in late June, Fort Bend County Judge Robert Hebert said county engineers have told him the county needs about $369 million in bonds to address all of the needed drainage improvements.

“I’m not going to ... ask my court to ask the voters to approve $369 million when I don’t know not only how it will be spent but [also] what impact it will have on improving the watershed,” Hebert said. “We have to do our own work, and that’s what this study is going to do.”

Hebert said the court anticipates the study will cost approximately $1.7 million but said the county plans to budget $3 million in case of unforeseen damage expenditures. Hebert and Mark Vogler, chief engineer and general manager of the Fort Bend County Drainage District, said the study could end up highlighting drainage issues not previously considered.

There is one particular area of concern in Katy: the Barker Reservoir. Hebert has also been traveling to Washington, D.C., to speak with senatorial and house delegation about clearing up some gray areas in the Clean Water Act and the U.S. Army Corps of Engineers’ definition of drainage ditches.

“We’re not waiting for this study to act in certain aspects [regarding] the Barker Reservoir and the obvious threat it [poses] to property owners on the backside of that reservoir,” Hebert said.

The Commissioners Court issued a lawsuit in May against the Corps seeking a federal court order to stop it from storing water on private property outside its jurisdiction. Hebert said the lawsuit will be used in conjunction with the watershed study to bring a recommendation to the public for a potential bond.

The National Weather Service will release a new report in September or October called Atlas 14, which could potentially change what a 100-year storm looks like for Fort Bend County, Vogler said.  The term “100-year storm” is a term used to simplify the definition of a rainfall event that statistically has a 1 percent chance of occurring in any given year.

“If [FEMA doesn’t fund Atlas 14], we need to prioritize what would be the most significant watersheds and update our master drainage plans,” Vogler said. “Atlas 14 is not public yet, so we can’t move forward with all of the aspects of the study, but small parts of each of the projects can still be done.”

Hebert emphasized the importance of the study and what it can do for the county in terms of storm preparation and addressing drainage issues and infrastructure.

“The watershed study is a necessary first step to identify those projects that we need to spend money on moving forward to make this county better able to withstand Harvey-type storms,” Hebert said. “We know we’re going to have to spend money, but we’re not going to go to the people asking them to support bonds until we’ve done our homework and we can intelligently explain what we’re going to do with the money.”
SHARE THIS STORY