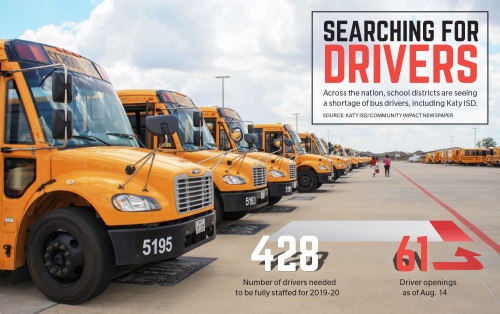 Katy ISD started the school year with a shortage of bus drivers, but it is not the only Houston-area district facing this challenge.n

Katy ISD is among many districts in the Greater Houston area, Texas and the U.S. experiencing a shortage of school bus drivers.

At the start of the 2019-20 school year, KISD had 61 school bus driver openings, said Maria DiPetta, KISD’s media relations and multimedia manager. To be fully staffed, the district needs 428 bus drivers to transport about 52,000 students daily.

A school bus driver shortage affects families because without them, some children are unable to get to school, or classes cannot go on educational field trips, Campbell said. Also, a regular driver increases operational efficiencies and creates consistency for students, other experts said.

Members from the KISD Transportation Department declined to comment.

“No district has implemented a solution that has solved all their problems,” Campbell said. “Increasing pay is impactful, but it’s not the only solution.”

Reasons for a school bus driver shortage vary depending on a district’s unique circumstances, Campbell said.

But one of the major challenges for attracting school bus drivers is the part-time, split work schedule, she said. Drivers typically drive a morning route and an afternoon route with a break in the middle of the day.

“As drivers, we really look for more hours so we don’t have to look for another job,” said Claudia Barrell, who started driving buses for KISD 10 years ago.

Finding a second job that is flexible to work within the sporadic school bus hours is not easy, said Barrell, who has spent the past five years driving for Lamar CISD. She said she has supplemented her income by also becoming a driving instructor.

A thriving economy also makes it difficult for school districts to attract and retain drivers because private companies can offer more hours and a higher pay rate, Campbell said.

“When applicants have a choice between a higher-paying, year-round, full-time private sector job or a school district bus driver job, they’ll often choose the private sector,” she said.

Training and licensing drivers is another challenge for school districts, Barrell and Campbell said.

“You have to prepare for a long time to become a driver,” Barrell said, adding it took her about seven months to get her commercial driver’s license and learn her route.

Campbell said to attract new hires, many districts offer to pay new drivers to take the tests necessary to receive their CDL.

DiPetta said that a shortage of drivers causes buses to be late to their stops.

“I’ve been doing this for 37 years and confident in my skills as a bus driver,” Jones said. “But if I take the keys to cover for a route, I won’t know it as well as someone who drives it every day. I have to read the route book, and I won’t get to the stops at the right time.”

Jones and Barrell also noted the importance of creating a relationship with the students on the buses. Jones said the same bus driver every day creates consistency for students, who are then more likely to attend school.

“You have to have a relationship with them and earn their respect,” Barrell said. “It took me a long time to learn how to drive and manage the kids.”

School districts must be proactive and get the word out in the community that they are hiring drivers, said Kayne Smith, Cy-Fair ISD’s transportation director. He spoke as the president-elect of the Texas Association for Pupil Transportation, an organization promoting safe and efficient student transportation.

“Constant advertising, recruiting and job fairs are crucial,” he said. “You’ll see many districts with advertisements on the sides of buses, banners in front of schools and signs across the district to let the public know that job opportunities for school bus drivers are available.”

KISD has created a variety of ways to attract and retain school bus drivers.

It offers incentives such as paid training and bonuses for attendance and driver referrals. Benefits include health care to drivers who work more than 15 hours per week and $2-a-day day care.

In response to challenges with recruitment and congested traffic, KISD implemented a new bell schedule last year. And to increase efficiency and safety, KISD installed GPS on its buses this year.

“The bus driving parent initiative emerged from discussions with principals and staff who were asked to help identify ‘out of the box’ approaches to driver recruitment,” she said.

Unlike Houston ISD and Fort Bend ISD—which are also experiencing a shortage of drivers, according to HISD’s press office and an FBISD audit report—KISD does not use private bus services to supplement its transportation needs. Jones said an in-house transportation department is less expensive than outsourcing bus drivers to private contractors.

Campbell said many districts increase the starting pay for bus drivers faster than for teachers, but that is not the case for KISD.

At LCISD, Jones said the department creates a safe and fun culture to keep retention high. For example, the department hosts a tailgate party in the fall. The offices are decorated, and alumni employees wear their letterman jackets.

“Our primary goal is safety and being efficient with tax dollars,” he said. “But you got to have fun. Promoting culture makes people want to stick around. But if this job isn’t something you enjoy—getting up early, cold mornings, dealing with children—then this isn’t for you.”