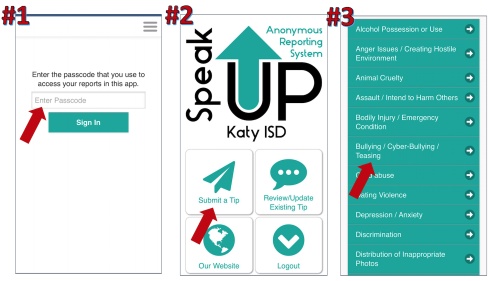 Katy ISD provided screenshots of what the SpeakUp application will look like to submit anonymous tips.

Correction: This story was updated to reflect the correct annual cost to the district for SpeakUP

Starting on the first day of classes, KISD students, teachers, staff and community members will be able to anonymously report bullying and potential criminal or violent activity at the district via SpeakUp, which will be an application and web form, said Ted Vierling, the KISD assistant superintendent for operations at the board of trustees’ July 29 work-study meeting.

In addition to better monitoring of these reports and data collection of these anonymous tips, SpeakUp will allow KISD staff to respond in real time to tips such as bullying, threats of violence, drug use, dating violence, weapons and mental health crisis, Vierling said.

With SpeakUp, a reporter can attach screenshots, videos and audio to help the district respond to a crisis before it happens, Vierling said. Additionally, SpeakUp will allow the district to communicate with anonymous reporters to obtain more information and let them know the district is responding to the tip.

“Research tells us that to to help keep your school safe, you need ... information before it happens, rather than after it happens," Vierling said. "We all know how to deal with situations when they do happen, but we want it before it happens to prevent a tragedy as a tragedy."

Existing practices at the district to report these anonymous tips include:

After SpeakUp is implemented, students will still be able to report bullying and other tips in a face-to-face conversation with a district staff member, Vierling said. The district will also continue to offer KatyConnect, a 24/7 crisis hotline to help students receive immediate help for mental health concerns.

"School safety has become a huge part of what we do as school teachers, administrators," Vierling said. "And it's the job of everyone. It's no longer just chief of police and our police officers. Everybody's got a piece of this."


How SpeakUp will work

According to Vierling's presentation, here is how SpeakUp will work: