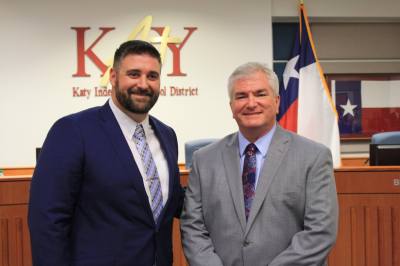 From left: Lance Redmon and Duke Keller are the new faces elected to Katy ISD board of trustees.

Katy ISD officially has two new members to its board of trustees.

Duke Keller and Lance Redmon took the oath of office at the KISD work-study meeting May 20. They were elected to the board May 4.

Keller won in a three-way contested race for Position 1—formerly held by George Scott, who did not run for re-election—against Rebecca Fox, who previously held Position 2, and Sean Dolan. Lance Redmon ran unopposed for Position 2.

Before Keller and Redmon took their oaths, Fox expressed gratitude to the KISD community for allowing her to serve for 15 years.

"I'm grateful, humbled, honored and hopeful for what the future has in store," she said. "I know that God has great plans for Katy ISD, and I know that he has plans for me."

Members of the board thanked Fox for her many years of service on the board. Scott, who had served since elected in 2016, was not seated at the board and did not speak.
SHARE THIS STORY