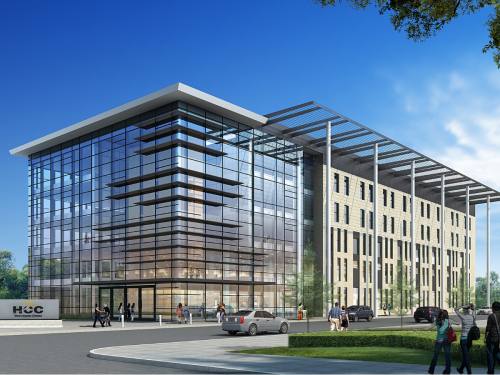 Houston Community College board of trustees approved in December to relocate and expand its Katy campus.

A Houston Community College System trustee says he filed a lawsuit Jan. 24 against the college system.

Trustee Dave Wilson alleges HCC unlawfully purchased the property for its new Katy campus at 228 Colonial Parkway, Katy; that five HCC board members held a meeting not in compliance with the Texas Open Meetings Act; and that HCC will unlawfully use bonds to pay for the campus, according to the lawsuit sent via email to Community Impact Newspaper.

Wilson and his attorney, Keith Gross of The Law of Keith J. Gross, said in separate phone interviews the lawsuit was filed the afternoon of Jan. 24. In an emailed statement, a HCC spokesperson said the college has not officially been served with the lawsuit. This story will be updated as new information becomes available. The lawsuit claims the 24-acre property on Colonial Parkway—with the option to purchase an additional 30 acres in the future—was unlawfully purchased because HCC did not publish a public notice 60 days before the date set to approve the execution of the contract to buy the property as required by local government code.

HCC board members approved the purchase of its new 24-acre campus Dec. 5 in a 5-2 vote, with two trustees abstaining. HCC plans to relocate students at the existing campus at 1550 Foxlake Drive, Houston, to the new location once a new building is constructed.

Wilson and Gross said in separate phone interviews that several days ago Wilson asked HCC for proof it had published the public notice. Because HCC did not respond, Gross filed the lawsuit, they said.

According to local government code, during those 60 days, registered voters within the HCC district have the opportunity to petition for a referendum to vote for or against the purchase. If at least 5 percent of registered voters sign such a petition, then the board of trustees cannot approve the contract unless approved by voters in the referendum.

The lawsuit’s third charge alleges HCC cannot use bond money to construct a campus outside its taxing district. In presentations to the board, HCC administrators said one avenue it would pursue to pay for the campus is through long-term revenue bonds. These bonds only require board authorization to issue rather than public approval, a HCC spokesperson wrote in a November email to Community Impact Newspaper. According to state law, the Katy area is within HCC’s service area via the Katy ISD boundary, but residents within Katy ISD have not voted to become part of HCC's taxing district, which levies a $0.100263 tax per $100 property valuation. Because Katy is not within the taxing district, HCC charges higher tuition fees to Katy-area students.

At several board meetings, Wilson has expressed his displeasure at constructing a new building outside HCC’s taxing district because he does not want these property taxes collected to fund construction outside the taxing district.

“Taking tax dollars from the residents of HCC and building a campus for the rich people of suburban Katy, TX, who do not pay taxes to HCC, will create an undue burden on HCC taxpayers and is wrong,” Wilson said in an email statement. “We will let the courts sort this out.” HCC estimates the total cost of the project—including the land purchase, design services and construction—will be about $55 million, according to the presentation to the board at the Dec. 5 meeting. The $55 million would be funded by the sale of HCC properties, a short-term bank loan and bonds as well as student tuition and fees.

HCC's plans include building a 140,000-square-foot building at the new campus to allow capacity to grow from 4,000 students to 7,000 students. Construction is expected to start at the end of 2019.