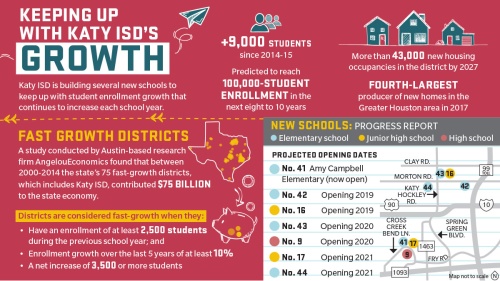 A growing student enrollment at Katy ISD, coupled with the Texas Legislature’s inaction to fix the public education system’s funding formula in the last special legislative session, has resulted in KISD having roughly $7 million less than previous years to educate almost 80,000 students for the 2018-19 school year.

By Aug. 24, 79,401 students were enrolled in KISD. The district saw a 2.9 percent increase in enrollment, a 2.4 percent increase in the tax base and as a fast-growth school district opened a brand new elementary school and has plans to open two more schools by August 2019.

“Just based on new students alone, we are looking at an increase in $17.9 million in cost,” Smith said. “The [funding] cliff is the fact that our local taxes only grew $8.6 million.”

Smith told trustees at a May meeting that this year’s budget is stable, but the district could face operating with an up to nearly $30 million deficit come the 2019-20 school year.

“We are going to manage as we always have in Katy ISD as best as we can to not go into deficit spending,” Smith said. “And we are going to hope that the state of Texas and the Legislature … help fund public education in Texas. And if that doesn’t happen, then there may be some things that are going to be tough decisions not just in Katy—all across the state.”

“The state of Texas has gone AWOL. They are missing in action,” Scott said. “They are taking money from this school district and putting it in the state treasury.”

Smith said while he does think the deficit projected in the coming years is significant, he has repeatedly warned trustees as a financial tactic to be overconservative.

Despite this, Smith said if the funding formula and basic allotment for students—which has been $5,140 for several years now—does not change in the next legislative session come January, the district will be facing a revenue shortfall in the coming years. According to the Texas Association of School Boards, the basic allotment is the amount of state and local funding a district receives to cover the costs of providing an education to a student.

With a fast-growth school district like KISD, increasing inflation plays a huge role in presenting challenges to balance the budget. KISD opened Amy Campbell Elementary School this school year and has plans to open another new elementary and junior high in 2019.

Despite working with a stagnant basic allotment and increasing inflation, other factors that have contributed to squeezing the district’s bottom line include unforeseen expenses like Hurricane Harvey. Smith said Harvey cost the district nearly $29 million, with the biggest expense being replacing the administration’s Education Support Complex.

“We have amended this budget like I have never seen a budget amended before, because of Hurricane Harvey,” Smith told trustees at a May 21 work study meeting.

Despite these unforeseen expenditures, the district is able to keep its tax rate steady this school year, with a proposed tax rate of $1.5166 per $100 valuation. Trustees are expected to vote on the rate at the Sept. 24 board meeting.

Even though Harvey cost KISD $29 million in unforeseen expenditures, district officials have worked diligently to combat the loss through applying for federal emergency grants and special programs.

The district has taken advantage of a section of the funding formula called “golden pennies” that help provide additional state funds in the wake of a natural disaster.  Since Gov. Greg Abbott declared Harvey a natural disaster and requested federal assistance, KISD was able to use the golden pennies in 2017-18 and again in 2018-19.

The district was also able to take advantage of an opportunity from the Texas Department of Agriculture to provide $12 million in free and reduced lunch to all students because of Harvey.

Smith said the district applied for a restart grant for $4.4 million and another emergency impact grant for an estimated $3 million that could lower expenses for the fiscal year 2017-18 budget, which was approved by trustees Aug. 27.

Despite these loopholes that serve more as short-term solutions, the district has been able to find ways to help balance the budget for the last year. For the 2018-19 school year, Smith and other local officials agreed serious changes need to be made to the public school finance system so districts like KISD do not have to operate in a deficit.

“[The public education funding system] is in pretty desperate need of fixing—it’s more like reforming it than fixing it,” state Rep. John Zerwas, R-Richmond, said. “The most important thing … as we go into the legislative session is to make sure that we are adequately funding the schools.”

FGSC commissioned the Austin-based research firm AngelouEconomics to survey the 75 top fast-growth districts in Texas—including KISD—and the effects they have on the Texas economy.

“From 2000-2014, that 14-year period, the sum total impact of the 75 fast-growth districts on Texas’ economy was a contribution of $75 billion,” Sconzo said of the January report. “It’s one thing to say education is an investment not an expense, but this study helps us quantify that.”

Sconzo added massive school districts like KISD also help contribute to the local economy through increasing job employment—KISD is the largest employer in the Katy area and has 9,185 employees according to the district website—the housing market and overall economic activity.

Sconzo said he agreed with Smith and said the coalition is also working with the Texas Commission on Public School Finance—which was established after the 85th Texas Legislature’s Special Session in 2017—to recommend solutions to include in its final report, which is due Dec. 31. Sconzo said the coalition’s main recommendation to the commission is to increase state support for facilities funding—money that is spent to build new schools and maintain upkeep of old buildings—which he said has significantly decreased over the last few years.

Judge Scott Brister is chairman of the Texas Commission on Public School Finance, and he said over the course of the 10 meetings of the commission, he has heard multiple programs proposed.

“My hope is that we can present several options to the Legislature showing effective programs that produce results, and suggesting how current funding can be reorganized to implement those programs,” Brister said.

In terms of addressing the need for increased funding for public education, Brister had a different opinion than Smith and Sconzo, who both argued that increased funding is a necessity to solving the funding cliff.

“Adequate funding is one part of creating highly effective schools, but not the only one,” Brister said. “A number of schools and districts are getting remarkable results, but others are not. The key difference I’ve seen so far is whether a district has inspirational leadership and gifted teachers.”

Please add the following text to the bottom of each education-related story: “For more local education news, please see all of the (local stories from our Education Focus edition).