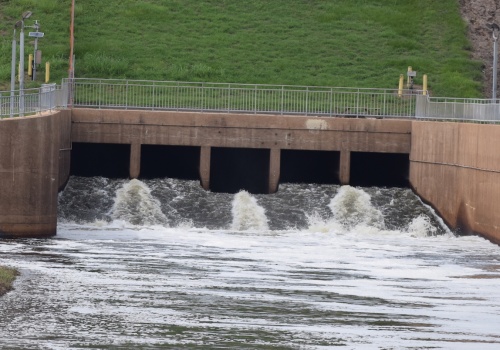 The Barker Reservoir empties into Buffalo Bayou in West Houston.

As of late last week, the Addicks and Barker reservoirs in west Houston were officially empty for the first time since Tropical Storm Harvey arrived in the region on Aug. 25.

The U.S. Army Corps of Engineers-Galveston District, which operates the structures, made the announcement Tuesday evening, saying the Addicks Reservoir was emptied on Thursday, Oct. 12, and the Barker Reservoir was emptied on Friday, Oct. 13. Lt. Col. Mark Williford, with the USACE-Galveston District's public affairs office, said the announcement was delayed in order to receive legal guidance.

"Hurricane Harvey and the resulting rainfall was an extreme weather event that tested infrastructure throughout the region and has been characterized as one of the most extreme rain events in U.S. history," USACE-Galveston District Commander Lars Zetterstrom said in a statement. "Flood risk management and enhancing public safety are at the forefront of all we do."

The reservoirs, which are normally dry and encompass a combined 24,520 acres of government-owned land, reached their peak pool elevation Aug. 30, according to the USACE. They contain several parks and recreation facilities and trails managed by Harris County.

When both reservoirs filled during Harvey's rainfall two months ago, the USACE decided to begin controlled releases of the waters into Buffalo Bayou early in the morning on Aug. 28. The USACE is now a defendant in multiple lawsuits brought by surrounding property owners who say their homes and businesses were flooded as a result of the dams' releases.

The USACE-Galveston District published a video of Harvey's inundation around the reservoirs through Sept. 18.