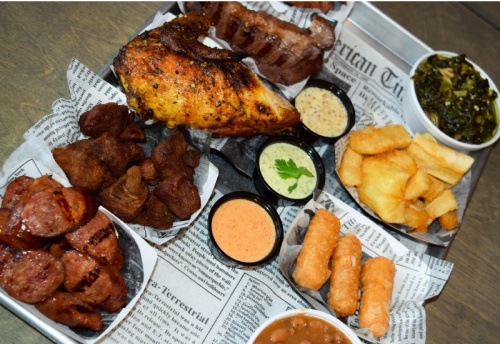 The Roko Sampler lets diners try a little bit of everything, including smoked sirloin, sweet and spicy sausages, fried pork, a quarter chicken and three sides. A variety of dips are also offered.

Gisael Gomez and his brothers Gustavo and Caesar opened Roko Grill hoping they would be able to bring a taste of their home country to Katy. The restaurant features a fusion of Venezuelan flavors with Texas barbecue and burgers.

Gisael said he and his brothers developed a love for cooking at a young age, and it was a duty they often enjoyed at family gatherings.

“We were always the ones that would cook for everybody,” Gisael said. “We never went to a chef institute ... but we always knew how to cook.”

The menu features a variety of barbecue classics smoked over a wood fire with Venezuelan seasonings. Dishes include sweet or spicy sausage, burgers, and tequenos, Venezuelan-style fried cheese sticks.

Gisael moved to the Katy area in 2012 to work in the energy sector, and his brothers eventually followed, he said. The three had celebrated a tradition of cooking Venezuelan barbecue using fresh wood with plenty of smoke to add flavor. One of the first things they tried to do was figure out a business that would allow them to work together with their family.

“We decided to give it a try, and my father helped [us by] investing in the business,” Gisael said.

That is where the idea for the name “Roko Grill” came from, he said. After working on the menu for about six months before opening last August, they decided to name the restaurant in honor of their father, Julio Gomez, whose nickname is “Morocco.”

The brothers do hope to expand, Gisael said, but for now they want to focus on fine-tuning the current location. Upcoming additions include new burger options and gluten-free hamburger buns, Gisael said.

Gisael said his father sometimes visits from Venezuela, where he still lives, to show support.

“I would say we are not working here; we’re just having fun with family,” Gisael said.