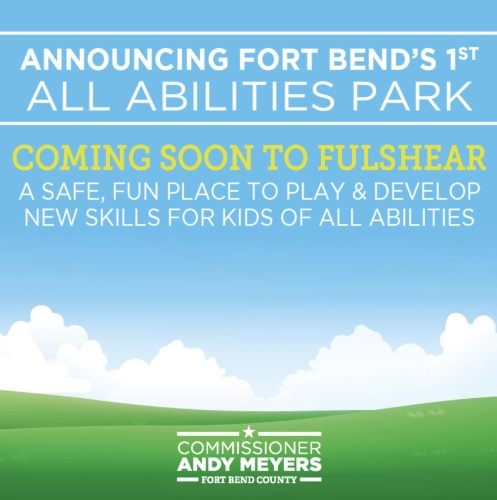 The city of Fulshear will be home to the first all-abilities park in Fort Bend County.

Commissioner Andy Meyers announced Oct. 16 plans for the park, which will be located near the intersection of FM 1463 and Katy-Fulshear Road between the Cross Creek Ranch and Tamarron developments.

“Fort Bend County Precinct 3 will soon be home to a safe, fun place for children to play and develop new skills—for kids of all abilities,” Meyers said in his statement.

Cross Creek Ranch and Johnson Development donated funds to help materialize the park, and Meyers said he and his staff will reach out to several nonprofits for their involvement as well as solicit corporate sponsorships.

Initial money for park infrastructure and site preparation will come in part from the Fort Bend County assistance district, and through his charity, Fort Bend Charities, Meyers will help merge funds and plan.

Principals of two parks located in Round Rock and College Station are helping in the development of Fulshear’s new park by offering feedback based on their own park’s success, Meyers said.

He said his team will need input from professionals from different disciplines and educational fields, local civic clubs, parents and professionals who are familiar working with children with special needs, and any Fort Bend County residents who would like to contribute.

Robert Pechukas, manager of policy and administration at Meyers' office, said people from all over the community have reached out with suggestions for the park.

One idea is to install wheelchair-accessible swings; another idea is to have restroom facilities that accommodate special needs.

“We’d like to include sensory items for those with autism and have elements that encourage social engagement,” Pechukas said. “It’s a small piece of land, but some element of a walking-running trail that allows for a quiet walk would be nice.”

The timeline for this project is to be determined, but Meyers said he hopes the park will be open next year.

Pechukas said the office is still working on the overall land plan for the site and plans to put together an advisory committee.

“As we move forward with our planning and input stage, we’ll work to incorporate the needs and desires of the community,” he said.