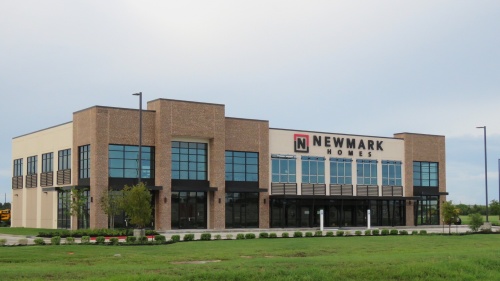 More than 30 Newmark Homes staff will work at the new building and about 12,000 square feet of retail or restaurant space is available at the site.

Newmark Homes has completed construction on a new 24,000-square-foot building in Katy, at the intersection of I-10 and Grand West Boulevard, just east of the Grand Parkway, according to an Oct. 29 press release. The company will move into the new headquarters in mid-November.

“We chose this location because of its proximity to many of our communities,” Mike Moody, president of Newmark Homes, said in the press release. “With our company growing, it was time for a move.”

The building is near the future Katy campus for the University of Houston, Katy Asian Town and the Katy Grand development as well as the Grand Parkway Park and Ride. The land and construction cost the company about $10 million, said Haunani Shipper of Total PR, the public relations firm for the development.

Newmark’s offices, including a design center, will reside on the second floor of the building which was designed by Identity Architects. Those offices will take up about half of the building, while 12,000-square-feet of space is available for lease on the first floor, Shipper said.

Newmark hopes to attract independent retailers and professional services such as dentists and restaurants in the available space, Shipper said. The businesses will be supported by more than 100 parking spaces on the site.

According to Newmark’s website, the developer is involved in the Cross Creek Ranch, Grand Ridge Crossing, Fulbrook on Fulshear Creek developments near Katy and Fulshear.
SHARE THIS STORY