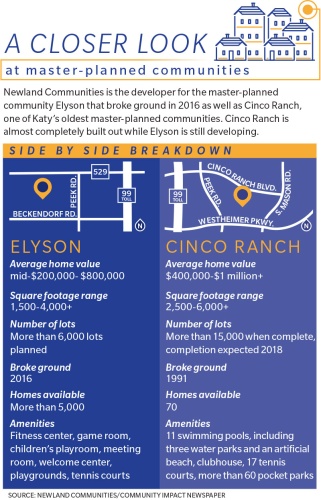 Xu Qing LLC recently purchased about 1,600 acres of land off FM 529 next to the Elyson master-planned community in early April, according to McAlister Real Estate, a Houston-based real estate firm. J. Troy Maxwell of Woodcreek LLC, the firm that assembled the acreage into one plot, said he expects the land to be developed into a master-planned community.

“Everything’s in place for it, but we’ll just have to see what their timing is,” Maxwell said.

The announcement of the new community aligns with the home development trend for the Katy area that dates back to 1991 when Newland Communities broke ground at Cinco Ranch. Since then, master-planned communities have continued to take root in Katy.

Heather Gustafson, marketing director for Newland Communities, said the Katy area continues to draw master- planned community development because parents are drawn to Katy ISD and access to major roadways, such as the Grand Parkway, I-10 and Hwy. 290, which provide easy access to the Greater Houston area.

Christi Borden, a realtor with Better Homes and Gardens Gary Greene, said the energy sector plays a big role in the trend of master- planned communities. Energy professionals often move as much as once every four years, so having a home in a community with steady or rising property values gives them stability, she said.

In a community like Katy, this can be critical because residents may have to sell homes relatively soon after buying them, Borden said.

“Historically speaking, they hold their values much better than nonmaster-planned communities, especially in downturns,” Naef said.

Borden said master-planned communities work to ensure property values are protected by providing amenities, such as green spaces and pools. Borden said these amenities are one of the first things installed in a development.

Newland is the developer for the Elyson master- planned community and Cinco Ranch, one of Katy’s oldest communities.

“One of the defining features of a large-scale master-planned community, such as Elyson, is to offer new homes in a wide variety of price ranges and styles, appealing to a diverse range of homebuyers,” Gustafson said. “That can include first-time buyers, move-up buyers and buyers wanting to scale down to specialized offerings, such as patio homes.”

This method keeps a $300,000 home from sitting next to a $1.8 million home, which can negatively affect the home value for the more expensive home and increase both the home value and taxes of the smaller home, Naef said.

Naef said he expects Cane Island to develop its 2,100 lots within the next five years while Gustafson expects Cinco Ranch’s remaining 70 lots to be developed by the end of 2018.

Borden said she continues to see interest in all these types of communities but warned that buyers should closely look at amenities to ensure the home is actually master-planned.

“I know there’s a lot of pocket communities being developed north of I-10 around Elyson, but whether they can really carry the title of master-planned community, I’m not sure yet,” Borden said.
SHARE THIS STORY