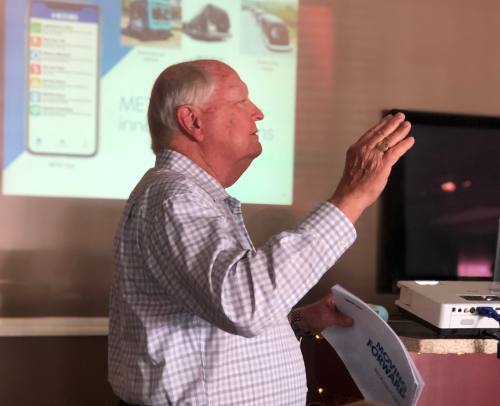 Leaders in the Greater Houston area are reimagining the transportation system in the region in anticipation of exponential growth in population and jobs in the next 20 years.

The Houston-Galveston Area Council and other community partners are collaborating with the Metropolitan Transit Authority of Harris County to develop a plan called METRONext.

“Mobility is important to this [Katy] community and to the communities around us,” Elder said. “It’s a plan for the traffic and a plan for the future. If you don’t plan, you plan to fail.”

By 2040, the number of jobs in the Houston-Galveston Area Council eight-county region will increase to 4.47 million, a 63% increase since 2010, METRO reports.

Project leaders have asked residents to voice their transit needs for the agency’s consideration as they develop a plan that could improve or expand services throughout cities in the region, including Katy.

“This is your mobility and transit program,” Elder said. “We want your input about the things you need in your community.”

METRO’s Park & Ride service offers commuters a ride from the suburbs to downtown, the Texas Medical Center and other major employment centers through high-occupancy vehicle, or HOV, express lanes.

Riders must first drive to one of METRO’s 27 Park & Ride lots, two of which are located in the Katy area—one at the intersection of I-10 and Grand Parkway and another in Kingsland.

The service also offers commuters a ride back to their vehicles, and METRO estimates commuter buses eliminate 20,000 trips each day.

Another option to consider is METRO’s STAR Vanpool, which serves Harris, Fort Bend and Waller counties.

A team works with riders to design a route for their commute, using HOV lanes to reduce travel times, and to help commuters find others interested in the program, according to METRO.

Between five and 15 commuters share the cost of the van, fuel, maintenance, parking and tolls. On average, each person will spend $4-$6 each day, per METRO documents.

“I’m one who didn’t realize we had so much transit available to us out here,” Katy real estate agent Clara Jean Machann said. “There are things going on that we need to keep up with, in our community.”

The agency proposed adding three new facilities: a transit center at the city center and two park and ride facilities at Westgreen Blvd. to Katy Mills, she said.

"The goal is to enhance regional express service seven days a week along I-10 West and link major destinations such as the Energy Corridor, Memorial City, uptown, and downtown," Jackson said. "Accessibility and usability improvements and other investments are designed to reduce barriers for seniors and the disabled."

Elder said the bond for all needed programs is $7 billion, and the first phase is $3.5 billion but will not require a tax increase.

METRO does not collect property taxes, but does collect a $0.01 sales tax in Harris County, per METRO documents, which will help support funding for bond package operations.

Other plan highlights include:

For more information, visit www.metronext.org, and to learn about how to start or join a vanpool, email [email protected] or call 713-224-RIDE.