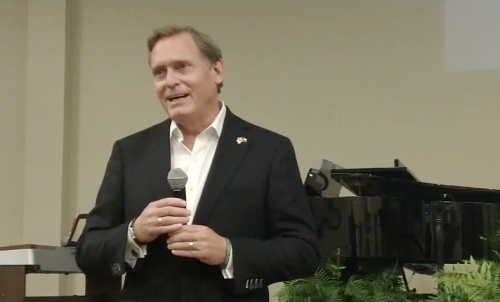 During the 86th legislative session, the Texas Legislature used some of its Rainy Day Fund, also known as the Economic Stabilization Fund, to help meet disaster-recovery needs.

State Rep. John Zerwas, R-Richmond, discussed the uses of the Rainy Day Fund and why he decided to resign his position representing House District 28 at the Sept. 17 meeting of Barker Flood Prevention, a local group advocating flood-management solutions for the Barker Reservoir watershed. About 30 people attended the meeting at River Bend Baptist Church in Fulshear.

The Rainy Day Fund was put into place in 1989 as a consequence of the depression of oil prices, he said. It is a savings account to help soften economic variations.

“It also became a narrative that said you only use this for one-time expenses and for disaster-related issues,” Zerwas said. “And so every legislative session there was a bit of some head-butting going on as to how this money should be used, and we didn’t use it very generously.”

In the most recent session, many bills were proposed on how to use the Rainy Day Fund for disaster recovery, Zerwas said.

“But what we basically came down to is we need to have a pot of money that people can access, not just this amorphous thing called the Rainy Day Fund, but something that is going to be specifically be available for people to access grants or loans or things of that nature,” he said.

So the Legislature created an account to use some of the Rainy Day Fund for grants that are accessible for disaster recovery, he said. About $700 million was placed in this account, out of a total of $2 billion of state funds—mostly from the Rainy Day Fund—to address disaster needs, he said.

“It was a good use of the money,” he said “And it’s going to continue to be, I think, crucial to look at as you go into the legislative session next time as disasters continue to happen.”

Zerwas, a physician, also briefly discussed his resignation as the representative of House District 28.

He had announced July 31 that he would step down from the position effective Sept. 30. In an Aug. 1 press release, The University of Texas System announced Zerwas had been appointed the executive vice chancellor for health affairs for the UT System effective Oct. 1.

“I just knew this was time for me to move on,” he said. “I was certainly was looking at another opportunity from the standpoint of my own personal career as a physician and how I wanted to play out what I call the last chapter of my career.”

A special election for voters to elect a new representative for the seat has been set for Nov. 5. Seven people have filed for candidacy.