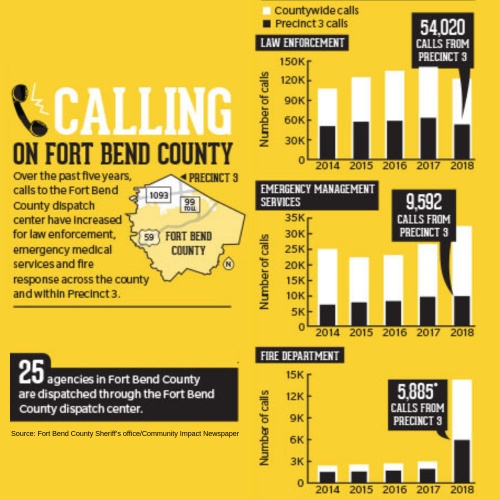 Fort Bend County may make improvements to its dispatch call center after a series of concerns were raised over the past year by local fire departments, emergency services districts and a county commissioner.

A special committee was created May 28 to look into various concerns brought up in part by fire and ESD departments.

Several of these agencies said there were areas for improvement with the center’s staffing configurations and dispatching technology, said Mark Flathouse, the Fort Bend County fire marshal and emergency management coordinator, at the July 23 Commissioners Court meeting.

A handful of local fire and ESD departments that use the dispatch center have indicated they may leave for an alternative provider if improvements are not made, Flathouse said. However, no agency has left the center, he and the Sheriff’s office said.

Under the change, constable deputies—overseen by a precinct constable, not the sheriff—are not directly dispatched to neighborhoods with contracts for additional law enforcement from the constable’s office.

However, constable deputies are still able to hear the dispatch over the radio system monitored by all on-duty law enforcement units who are free to respond, Fort Bend County Chief Deputy David Marcaurel said.

Residents in the Katy and Fulshear areas in neighborhoods that pay for these contracts are concerned about the change, Meyers and Thompson said. This is because the nearest available law enforcement officer, such as the contracted constable deputy, may not be dispatched to a call, they said.

Fort Bend County Sheriff Troy Nehls said this policy change was enacted because contracted deputies are meant to be a supplemental service, not be the primary public safety entity.

“There’s been lots of misinformation that was distributed to the public regarding our dispatch center,” Nehls said at the May 28 meeting. “Much of this information being spread to the public we serve states 911 calls [are] not being answered in a timely fashion, placing our citizens’ lives at risk. This could not be further from the truth.”

When asked whether these are the same purchases as suggested by the 2018 committee, Marcaurel said: “These [purchases] were already on the table prior to this committee formation. In fact, the automated system for fire dispatch was set to be purchased during the last part of last year but was delayed.”

Other suggestions from the committee included hiring a consulting firm to help create strategic plans. However, none of the recommendations discussed were related to the Jan. 1 dispatch policy change. Flathouse said in an email the committee has recommended the sheriff’s office review its policy and procedures to create consistency for all agencies.

The court has requested the committee continue to meet to provide assistance to the sheriff’s office on the dispatch center’s operations, Flathouse said.

“[The sheriff’s office is] always looking for ways to improve service delivery and efficiencies and will continue to participate in collaborative efforts,” Marcaurel said.