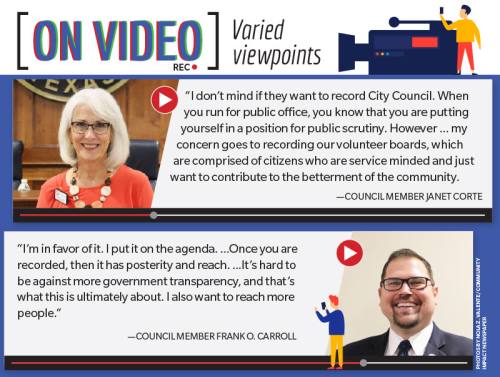 The city of Katy may soon make local government meetings more accessible to the public.

In an effort to increase transparency, Katy City Council is considering livestreaming its meetings and making them available on the city website for residents who are interested in the political process and unable to attend.

Council Member Frank O. Carroll put the item on the agenda for the June 17 meeting to begin discussions on the matter. He said the city of Katy is behind compared to other entities that already record their meetings, including Fulshear City Council, Houston City Council and Katy ISD.

“Everyone has done it, so we don’t have to reinvent the system,” he said.

Because the city of Katy has fewer than 50,000 people, it is not required to record its meetings, according to state law.

Mayor Bill Hastings said he can see pros and cons to recording meetings, and the council must discuss the legality of recording any committees outside of City Council and the cost.

Carroll said the main reason for his proposal is to increase transparency, which Heritage Park West resident Michael Meihls said he supports.

“[Recording council meetings] absolutely needs to happen,” he said. “There should be nothing to hide, and this way residents can be informed if they can’t be involved.”

The city of Fulshear has about 11,000 fewer residents than the city of Katy and has been livestreaming its council meetings since August 2018.

“We wanted to make sure we were very transparent, so we budgeted it in to make it happen,” Fulshear police Capt. Michael McCoy said.

“[Fulshear] only records entities that hold meetings at the Irene Stern Center, where the cameras are installed,” he said.

Fulshear did not need to spend money on hiring additional staff because the cost for the service is factored in, he said. Swagit staff remotely control the cameras inside the Irene Stern Center, where City Council meetings are held monthly.

The city of Fulshear and Swagit could not provide estimates for the cost of each entity’s service, and the investment costs for the city of Katy have not yet been calculated.

City Administrator Byron Hebert said at the June 22 meeting that it would be a long journey before council meetings could be recorded. He said the city secretary’s office is looking into the logistics behind doing so.

“It’s hard to be against more government transparency, and that is what this is ultimately about,” Carroll said. “I also want to reach more people.”