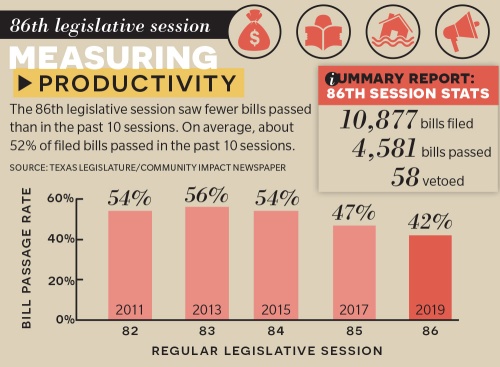 Local city, county and school district leaders are sifting through new laws and changes to existing ones, they said.

At the 86th legislative session, state officials tackled big topics this year including property taxes, school finances and flood mitigation. However, only a handful of bills related to unincorporated areas passed.

Community Impact Newspaper has crafted a primer on these issues and how new laws may affect the Katy area. What it does: Senate Bill 2 creates an online database where information about property tax rates will be accessible for property owners, said state Sen. Paul Bettencourt, R-Houston, author of the bill. It also prevents cities and counties with more than 30,000 people from collecting 3.5% more maintenance and operations property tax revenue than the previous year without voter approval. SB 2 takes effect Jan. 1, 2020.

SB 2 will also standardize the  appraisal process, which will help Katy-area residents who own property in two or more counties, he said.

However, SB 2 may place restrictions on local governments from gaining enough revenue to provide public safety and build new infrastructure, said Bennett Sandlin, the executive director of Texas Municipal League, an organization that advocates for cities. But the bill’s effects on some Katy-area governments may be minimal, he added.

The cities of Katy and Fulshear have populations under 30,000, so they can raise $500,000 more than the previous year without automatically triggering an election, according to Sandlin. Voters in these smaller cities can still petition to hold an election under certain circumstances to approve the revenue growth.

“For Katy and Harris County, because of the tremendous growth, it could have a lesser impact,” he said.

Waller County Judge Trey Duhon said he applauded legislators’ efforts to lower property taxes but noted the revenue cap will cause major problems for many counties with a growing list of unfunded mandates. Fort Bend County Judge KP George said all local governments are in a tough position. Why it matters: HB 3 is one of the largest attempts to reform the state’s school finance system. It provides tax relief and increases funds to Katy ISD with state dollars. State Sen. Paul Bettencourt, R-Houston, estimates between SB 2 and HB 3, property owners will pay about $460 less annually in property taxes in 2021.

Smith expressed concerns about HB 3. Property tax collections will be based on current-year values instead of prior-year values. The basic allotment was increased to offset the change, but it many not be enough, and the use of current-year values creates budget challenges, he said.

KISD does not gain as much additional funding as other districts because the new funding formula no longer takes into account statewide differences in geography and related costs based on the cost of education index, he said. Instead, the funding formula generates more funding for districts with high numbers of students who are low-income, special education, dyslexic and bilingual as well as districts with below average cost of education indexes and little property value growth.

Smith said there are concerns about HB 3’s sustainability because districts will be reliant on the state for funding instead of property taxes. What it does: Senate Bills 6, 7, 8 and 500 are all related to flood mitigation, and here is what each bill will do:


Why it matters: Nearly two years after Hurricane Harvey, the state is providing additional funds and loans to pursue flood-mitigation projects across the state. The bills will help Katy-area governments be prepared for responding to floods.

What it does: Several bills related to unincorporated areas were filed, and two bills that will affect the Katy area received the governor’s signature.

SB 1303 will ensure a municipality, such as Houston, inform property owners in its extraterritorial jurisdiction—or a band of unincorporated land surrounding the city’s limits it can eventually annex—of any changes in zoning regulations. Cities must also inform residents of plans to annex their property as well as create publicly available ETJ maps.

HB 956 will allow county assistance districts, or CADs, to be dissolved.

Why it matters: About 82% of the Katy-area’s population lives in Houston’s ETJ, where the city regulates development and can levy sales tax through strategic partnership agreements, or SPAs—and share the revenue—with municipal utility districts. But ETJ residents cannot vote in city council elections, and many call this taxation without representation.

SB 1303 will help inform residents in Houston’s ETJ of the regulation powers the city of Houston has, said Carole Lamont, an assistant aide to Harris County Precinct 3 Commissioner Steve Radack.

A series of CAD bills were filed, but only HB 956 will become law. The other bills that failed would have given Fort Bend County additional tools with sales tax for public projects in unincorporated areas. The governor vetoed two bills because they did not provide adequate safeguards to protect against abuse, per press releases.

But Fort Bend County Precinct 3 Commissioner Andy Meyers, the impetus behind HB 958, HB 957 and the CAD bills, has not lost hope.