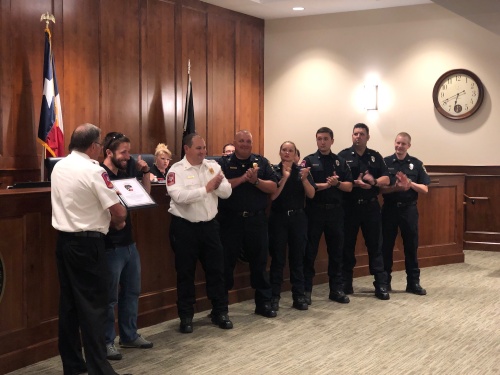 Fire Chief Russell Wilson honors the crew who responded to a call June 9 to save a man.

Mayor Bill Hastings nominated Council Member At-Large Chris Harris to be mayor pro tem, a person to assume the mayor position in the absence of the actual mayor, at the July 8 Katy City Council meeting.

Council Member Durran Dowdle is the current mayor pro tem. He was elected to Katy City Council in May 2016 and reelected in 2018 and his current term will end in 10 months.

“This was a hard decision,” Hastings said. “[Dowdle] has been a great asset to the city for many years. I respect him. He has done a wonderful job as mayor pro tem, but I needed someone who could fill in the voids of things I couldn’t attend.”

Council Members Frank O. Carroll and Janet Corte expressed their desire to keep Dowdle as mayor pro tem as an advantage and resource for the city of Katy during his final 10 months in office.

“We are a relatively new council, and Durran has been our mentor all these months,” Corte said. “At this point, I have to go with experience. I vote 'no.' Ten months from now, it would be a different vote.”

Carroll followed with a "no" vote, and Dowdle abstained while Hastings stood by his nomination.

The motion to nominate and confirm Harris as mayor pro tem failed with two votes in favor and three against and will be revisited at the next City Council meeting July 22.

Council discussed the motion made by Carroll to amend the city of Katy Code of Ordinances to penalize the release of information from executive sessions.

Council Member Jenifer Stockdick suggested amending the current penalty, which is the dollar amount equal to one mayoral or council member pay, whichever is applicable, to $500.

Other considered changes included minor verbiage adjustments to ensure city staff is legally allowed to be in the know about city matters discussed during executive sessions.

Carroll withdrew his original motion to bring this agenda item to the council to allow time for City Attorney Art Pertile to draft an amended version of the code before the council proceeds.

• Katy fire Chief Russell Wilson and Hastings recognized a crew of six firefighters who responded to a call June 9 at Momentum Indoor Climbing in Katy and saved a man who suffered cardiac arrest.