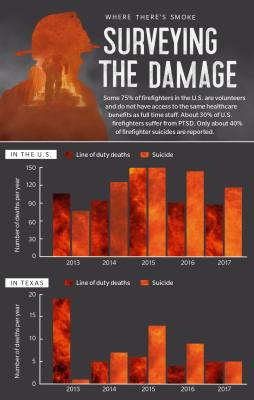 Firefighters are more likely to die by suicide than in the line of duty, Katy Fire Chief Russell Wilson said. To help his staff with the stress of their jobs, he has brought a comprehensive mental health initiative called Operation Resilience Program to the Katy Fire Department. It includes a peer support program, family days, workshops and evidence-based training on coping techniques.

Over the past two years, Wilson and Gabriela Morgan, a local trauma specialist, created the Operation Resilience Program to lower the stigma related to seeking treatment and to create a stronger link between firefighters’ families and their co-workers at the station. The program addresses depression, post-traumatic stress disorder and physical health. On March 25, Katy City Council accepted a $378,328 grant awarded to the KFD to fund the program for the next two years.

With the new program in place, the KFD is part of the less than 2% of fire departments across the U.S. that have a comprehensive mental health program, said Jeff Dill, a retired firefighter and founder of National Firefighter Health Alliance, which tracks first responder suicides across the U.S.

“This program will help everyone see that it’s not a weakness to talk about emotions that bother us and that it’s beneficial to talk about it, even if it’s just with the [fellow firefighters],” Assistant Fire Chief Dana Massey said. “The first time I had to speak about my struggle in a public setting, it was not easy, but it gets easier the more you talk about it.”

PTSD can develop after a person has experienced or witnessed a traumatic or terrifying event—things firefighters see often, Wilson said—according to the American Psychiatric Association. Those with PTSD may relive the event through flashbacks or nightmares and may feel sadness or anger. They also may feel detached or estranged from other people.

When Massey goes to the shooting range for a few rounds of practice, the gun powder triggers PTSD symptoms for her, she said.

“Loud noises I do not like, whereas before they didn’t bother me,” she said. “Now I have an emotional reaction to them, but it used to be really bad.”

The depression rate is almost twice as high among firefighters than in the general U.S. population. In a survey of more than 1,000 firefighters across the country, about 47% reported thinking about or imagining suicide at least once during their career, an April 2018 Ruderman Foundation study found.

In August 2015, Jason Anderson, a 30-year-old Katy firefighter, died by suicide at the firehouse while 11 shift mates, including Massey, were in the station’s dine-in area.

Wilson was appointed in May 2016, three months before the one-year anniversary of the suicide, and he said many of the shift mates who witnessed it were still having a difficult time coping.

“Touch, sight, hearing and taste—all of those can be triggered,” Massey said. “It did for us here, for a long time. Some still talk about it.”

Since 2011, 1,295 firefighter and paramedic suicides have been reported across the U.S., Dill said. With 114 reported cases, Illinois ranks first in the highest number of suicides, and Texas follows in fourth place with 79.

Dill estimates only 40% of firefighter suicides are reported each year, so the number is much higher. He said the statistics are not accurate due to a lack of reporting for two main reasons: Families wish to remain silent, and retirees and volunteer firefighters—who do and see the same as career firefighters—are often not included in official reports.

“I tell my firefighters all the time, ‘Quit trying to dehumanize yourself by denying that it bothers you,’” Wilson said. “If they can go out to a bad highway wreck and that not bother them, they aren’t allowing themselves to be human, and therefore can’t be compassionate. We’ve been in this trap as first responders for years, where we want to help everybody but ourselves.”

Wilson found three trauma specialists to include in his mental health initiative, including Morgan and Austin-based Tania Glenn, who visited the KFD earlier this year to lead the first peer-to-peer group training.

Glenn explained to the Katy firefighters the biochemical changes occurring in their bodies during PTSD symptoms. For example, high levels of cortisol—a stress hormone—are produced each time the fire house bell goes off, even if the call is not for them.

“[Glenn] explained PTSD in a firefighter mentality way,” Massey said. “We could understand what our brain is doing—what our body is doing. Once they bring that to the families, that’s going to open a lot of eyes, because it opened mine. There were things about me I didn’t recognize were happening until she explained it.”

Along with the ORP, Wilson created a wellness program to address cancer and assess overall physical health as well as a behavioral health initiative to address depression and anxiety.

“We found cancer in a 38-year-old with a wife and three little girls,” he said. “It was malignant, but because we picked it up on the scan, now everything is fine. We’ve had some great successes on the cancer side, but with PTSD, we still have a lot of work to do.”

The program also found cancer in a 26-year-old firefighter who has since come back to work.

The ORP will make firefighters eligible for six sessions to participate in evidence-based services to help with PTSD annually, and each firefighter dependent will be eligible for four.

Wilson’s wife along with another firefighter’s wife added a family day to the ORP to create a stronger support system between the “fierce camaraderie” at the station and their individual families, he said.

“We tend to get bad about letting our firefighter family become our primary family,” Wilson said. “Divorce rates are high in the fire service.”

Morgan said there will be surveys to measure how many firefighters participate in the sessions and to track reports of improvements and overall well-being. If the program is successful, it will increase the likelihood of the ORP being re-funded and even expanding to other first responders in the Katy area, such as the police department.

Former mayor Chuck Brawner, who was overseeing the program, suggested including police. Wilson and Morgan said they tried reaching out on several occasions in the initial planning stages but received no response. However, newly appointed Chief Noe Diaz said he wants to collaborate in the future to expand the program to his officers.

Although the Harris County Fire Department has a mental health awareness program, it does not encompass the same components of the ORP, making it unique to the Greater Houston area.

Fire departments in Fort Bend County and Fulshear do not yet have a complete initiative and rely on the Employee Assistance Program, which often does not include trauma specialists in local networks.

“In the beginning, I was charting a lot of unknown territory,” Wilson said. “I knew few departments that had any in-house programs.”

Although the funds only cover the department, Morgan said she would welcome a police officer who needed their resources.

“We as chiefs are responsible for the whole health of our people, which includes the physical, medical and emotional,” Wilson said. “We see things that most people don’t have to see. It’s the sights, the sounds and the smells that tend to haunt you.”

If you or someone you know is struggling, help is available.
SHARE THIS STORY

The Wild West Brewfest, an event featuring more than 100 brewers from across the country and more than 500 beers, will return to Katy this November.

Fort Bend Liquor Store offers a variety of wine, beer and spirits, with a focus on fine wines at multiple price points.

While the name and image have changed, the existing public transit services will continue to operate as an affordable, efficient and safe transportation option in Fort Bend County.