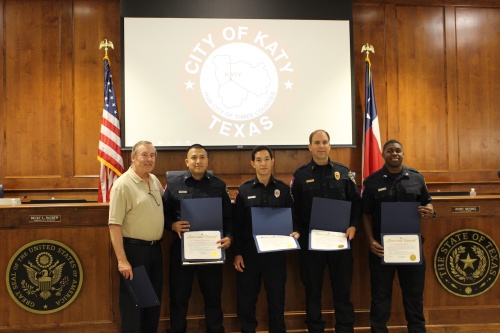 After eight minutes of heated debate, the May 13 Katy City Council meeting abruptly ended when Council Member Chris Harris then Council Member Jimmy Mendez walked out of the council chambers minutes before the scheduled executive session, leaving the council without a quorum to move forward.

Tension rose when Mendez, backed by Harris, asked to defer action or discussion on the agenda items regarding the re-employment of previously suspended employees and providing a penalty for the public release of executive session information until he had further information.

Harris added he received the agenda packet May 10 at 5:05 p.m. and that under law, any ordinances or resolutions must be delivered to council members no later than 5 p.m. on the Thursday preceding the meeting at which it will be considered.

City Attorney Art Pertile explained that when a council member “tags” an agenda item, as Mendez did, it means no action can be taken on an item and can be moved to the following regular City Council meeting or until that council member receives the information they seek.

“We just need to take a deep breath, and we will come back to address these issues,” Harris said. “I know half of you are going to be mad, and I love y’all, and I’m really sorry, but we need to do this for the community.”

Carroll, a lawyer, accepted the legal restrictions on taking action but insisted the items at minimum be discussed, and a vote was held to table the discussion until the next regular City Council meeting June 24, per his request.

Breaking the tie between Mendez and Harris versus Corte and Carroll, Council Member Durran Dowdle voted to proceed with the executive session, causing Harris to leave the council chambers.

“I don’t want to do the executive session,” Mendez said before he followed. “I guess you don’t have a quorum, and we’re not going to do this.”

Before he left, Harris said he did not have an issue with the agenda items but did not understand why they had to be discussed at that moment when anything that is passed or discussed will upset many people.

“I do not understand … why this next mayor can’t come in and have a discussion with council members and we each maybe have some ideas on how to make these two ordinances better,” he said. “We’re all going to be happy.”

As the council was left without the option to continue the executive session, Carroll said the city of Houston has given Katy an example of what they do not want their City Council to be and that what happened was a politics play aligned with the things that happen at Houston City Council meetings.