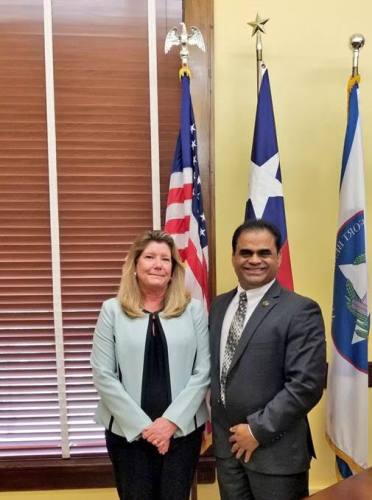 Update: The office of the Fort Bend County judge responded to Community Impact Newspaper's questions. The story below, which originally published at 10:55 a.m. on April 24, has been updated twice to reflect new information.

The Commissioners Court voted 3-2 to appoint Carrie Surratt as the county’s tax assessor-collector at the April 23 meeting. She will serve until December, 31, 2020, unless re-elected in the November 2020 general election.

Surratt replaces Patsy Schultz, who announced at the March 26 Commissioners Court meeting she would retire April 30. Schultz was first elected as tax assessor on Jan. 1, 2005, and has worked for the county since 1981, Judge KP George said at the March 26 meeting.

Surratt has worked at the Fort Bend County Tax Office since August 2009, Communications Director for the office of the county judge Xavier Herrera said in an email. Her most recent position was administrative services coordinator, and she will start her new position as tax assessor-collector on April 30. The salary for the position is about $130,000.

“I just want to voice my disapproval,” DeMerchant said. “No disrespect to Carrie. I will work with her moving forward, but she’s not my pick for this.”

George said the decision was not an easy one, but he is confident Surratt has the experience to do the job.

“I believe with the various conversation[s] with Carrie and also others and her experience and her understanding and work, the tax office is going to create a seamless transition,” George said. “It's going to be in the best interest of Fort Bend County and its taxpayers and its citizens.”